Jaipur: Farmers ‘bury’ themselves to draw attention towards their plight

Home » City Reports » Jaipur: Farmers ‘bury’ themselves to draw attention towards their plight 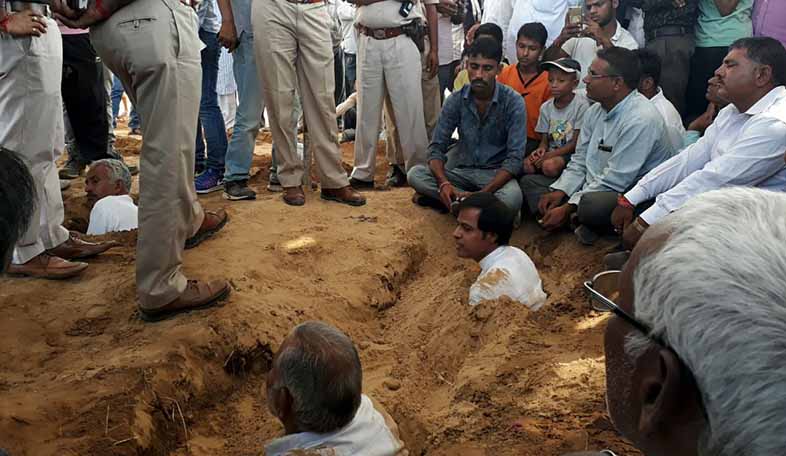 Jaipur: ‘Land Samadhi Satyagraha’ against the acquisition of farmers’ land in Nindar village of Jaipur district is hitting headlines, but there has been no action on part of the authorities.

In this village on Sikar Road, the Jaipur Development Authority is coming up with a housing scheme on 1350 bighas of agricultural land.  Three days ago about 22 farmers partially buried themselves in neck-deep sand pits and started protesting the acquisition. Even groups of women have joined the men and can be seen sitting in sand pits.

It is believed that JDA has already acquired about 500 bighas of agricultural land, however, is unable to acquire the remaining bighas due to this protest. The farmers have approached Jaipur Development Commissioner Vaibhav Galriya.

The farmers believe that they are being unfairly treated and their lands are being targeted. They have also demanded compensation under the new Land Acquisition Act. They claim that in the past 15 days, no government representative has felt the need to listen to their pleas against land acquisition.