The doctor registered an FIR with Adarsh Nagar police following which the gang was busted. 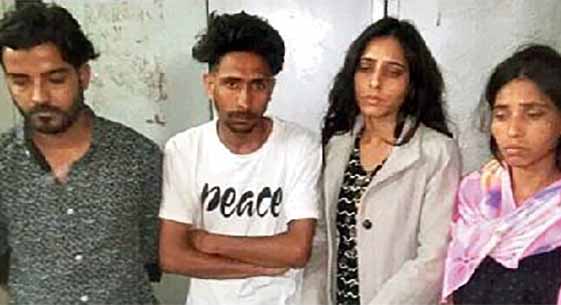 The gang that blackmailed a doctor in Jaipur.

Jaipur: Adarsh Nagar police in Jaipur arrested four persons including two married women for attempting to blackmail a doctor after threatening to implicate him in a bogus rape case. One of the women in the gang befriended the doctor through a dating mobile app – Tinder – and then called him to visit her at their house on the pretext of a call for medical consultation.

When the doctor showed up, they started blackmailing him and demanded Rs 10,000. The doctor registered an FIR with Adarsh Nagar police following which the four persons were arrested.

SHO, Adarsh Nagar Braj Bhushan Agarwal said that those arrested are Bhojraj Panwar, Mohammed Abid, Muskan and Shabnam. Bhojraj, Abid and Muskan are residents of Bikaner district, while Shabnam belongs to Hanumgarh. They were living in a rented accommodation in Kamla Tower in Ashok Chowk area in Jaipur.

“We have recovered a mobile phone and a purse that they snatched from the doctor,” SHO said. Doctor Dilip Ganwandi had registered the case on Monday.

It came up during preliminary investigation that the two women members of the gang are married, but had separated from their husbands and were living with Bhojraj and Mohammad Abid.

“Bhojraj and Abid used to find the victims and then they used the women to honey trap them. They would then call the victims to their houses on some pretext,” said the officer.

As soon as the victim enters the house, they would start blackmailing him, accusing him of harassment and rape.

“They had demanded Rs 10,000 from the doctor. He said that he didn’t have the money with him and somehow reached home. He then confided in his family members about his ordeal following which the gang was busted,” said the officer.