The electricity department officials were tightlipped about the demand, but highly placed sources said that they have received some communication from the hackers. 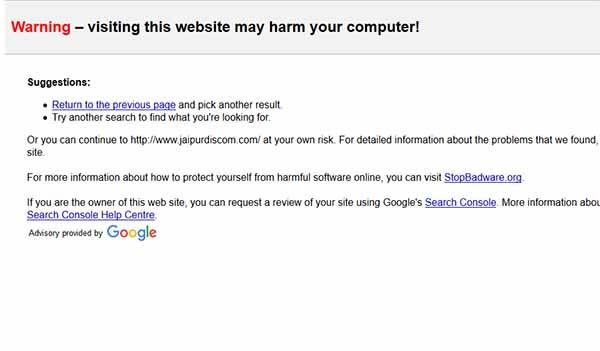 Jaipur: Thousands of Jaipur residents who opened the Jaipur discom website on Saturday to pay electricity bills and for other works were in for a shock. They found that the Jaipur Vidyut Vitran Nigam Ltd (JVVNL) website had been hacked. Sources said the hackers have demanded bitcoin to reactivate the site, however there was no official confirmation about the demand. Google raised a red flag after the site was hacked, warning visitors not to browse it as it could harm their computer.

The electricity department officials were tightlipped about the demand, but highly placed sources told The PinkCity Post that they have received some communication from the hackers who said that they would activate the website only when the ransom was paid in the form of bitcoins.

The data from the website has now been uploaded onto the energy department’s website. However, people were unaware of the department’s decision to shift the data and didn’t know how to access it.

In a sheer case of negligence, the IT team running the website had not even got an SSL certificate, keeping the site exposed to malware attackers.

According to SimilarWeb estimates, the website receives nearly 1.59 lakh visitors a month.