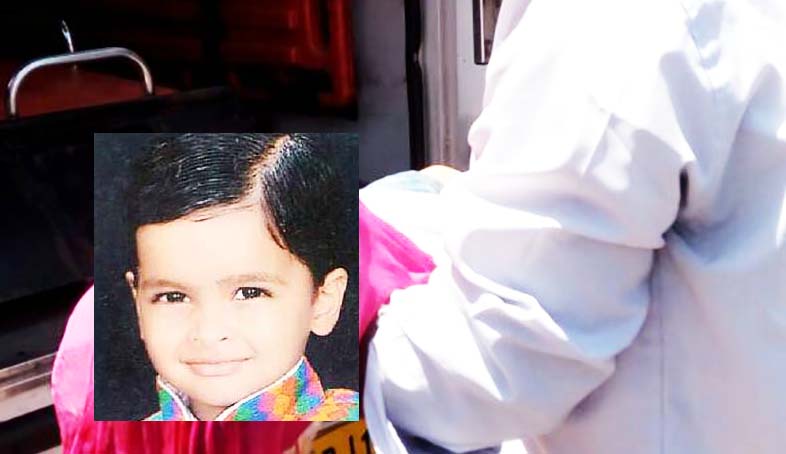 Four-year-old boy, Siddhartha alias Ganesh, was mowed down by a speeding truck on Haldi Ghati Marg on Tonk Road on Monday.

Jaipur: A four-year-old boy, Siddhartha alias Ganesh, was mowed down by a speeding truck on Haldi Ghati Marg on Tonk Road on Monday. He was in the lap of his mother who was sitting pillion, while his father was riding the bike when a speeding mini-bus rammed into the bike.

The couple fell onto the road and sustained minor injuries, but Siddhartha  was thrown in front of a truck coming from behind. The truck ran over him cuasing his death on the spot. His parents were inconsolable. His mother is expecting a baby.

Mukesh, a resident of Pratap Nagar Sector – 16, was going to Sanganer to visit relatives on his bike along with his wife Jyoti and son Siddhartha when the mishap occurred around 11 am. Mukesh who works in a private company was riding the bike.

“A minibus rammed into the bike. It lost control. Mukesh and Jyoti fell to the road. Siddhartha slipped from the lap of his mother and was thrown onto the road. A truck coming from behind ran over him,” said a police officer.

The truck and minibus drivers fled the spot.

Some passers-by called the police and an ambulance. By the police arrived at the scene, the passers-by had taken the boy to a hospital where doctors declared him brought dead.

Jyoti had a leg fractured. The couple was discharged from hospital after primary treatment.

The police have registered a case of rash and negligent driving against the truck and mini bus drivers and launched a search for them.

“According to eye-witnesses, the mini bus was overspeeding. We have taken statements of a few people who witnessed the incident. The minibus and truck have been seized,” said the officer.