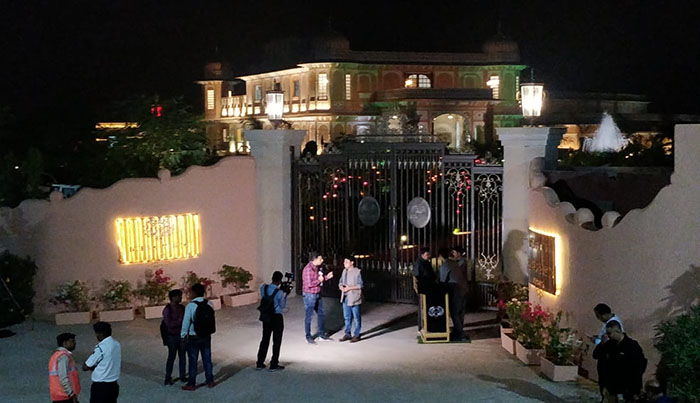 The resort on Delhi Road in Jaipur where Congress MLAs are staying.

Jaipur: It’s apparently vacation time for about 40 Congress MLAs who have been shifted to Jaipur amid the tug of war over government formation in Maharashtra. The Maharashtra MLAs who are staying at a resort on Delhi Road in Jaipur are touring tourist places in Jaipur and nearby towns and enjoying the hospitality extended to them by the Congress government in Rajasthan. Chief minister Ashok Gehlot personally visited the MLAs and ensured that their stay in Jaipur is comfortable.

Over 40 MLAs are staying in Jaipur and over the past two days, they have visited several tourist destinations in Jaipur, Ajmer and Pushkar. Some MLAs are being accompanied by their relatives.

“From chief minister Gehlot to several cabinet minister and party leaders have visited these MLAs over the past three days since their arrival in Jaipur. The MLAs are being escorted by police and Congress workers while they are visiting tourist places in Jaipur including Amer Fort, Jal Mahal and Hawa Mahal,” said a source.

The Congress suspects that some BJP leaders are in touch with the Congress legislators in Maharashtra and are trying to lure them into joining the saffron party so that it can form the government. So all the Congress MLAs have been shifted to Jaipur.

The BJP won 105 assembly seats, while Siv Sena won 56 seats. The Congress and NCP tally was 44 and 54 respectively.