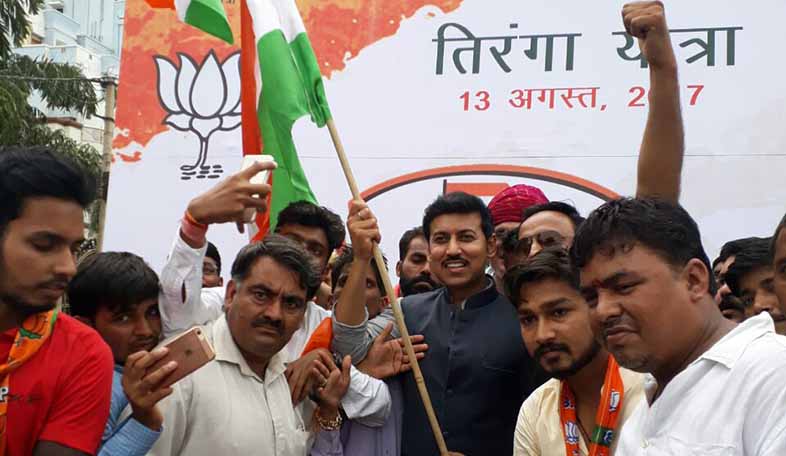 Jaipur: Under the BJP’s national program to evoke patriotism among citizens, the party’s Rajasthan unit took out ‘Tiranga Yatra’ in all eight assembly constituencies of Jaipur.

Amid a spectacular display of tricolor, BJP workers led by senior leaders raised slogans. However the lack of discipline was on full display at several places in the city. The BJP workers didn’t wear helmets while taking out the 20-km long Yatra in Adarsh Nagar constituency. The rally had been flagged off by BJP’s Rajasthan president Ashok Parnami and Jaipur MP Ramcharan Bohara. Hundreds of workers were not wearing helmet. 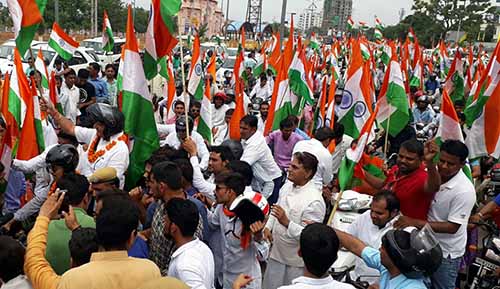 Rajyavardhan Singh Rathore was wearing helmet, but many workers behind him violated the traffic rule. Image credit: Post staff.

MLA Mohan Lal Gupta flagged off the rally from Heera Ki Mori in Kishanpole assembly area. The rally was welcomed by officebearers of trader associations in Johari Bazaar, Kishanpole Bazaar and Chandpole Bazaar. The youths participating in the rally were not wearing helmets. More than two people were riding on many bikes. The public representatives and politicians didn’t ask the workers to follow traffic rules. Traffic jams were reported in several places in the Walled City.

Union minister of state for information and broadcasting Rajyavardhan Singh Rathore flagged off the rally from Bhawani Niketan on Sikar Road.