The duo was attempting to smuggle the currency into Bangkok via Thai Smile flight at Jaipur airport when the intelligence officials caught them. 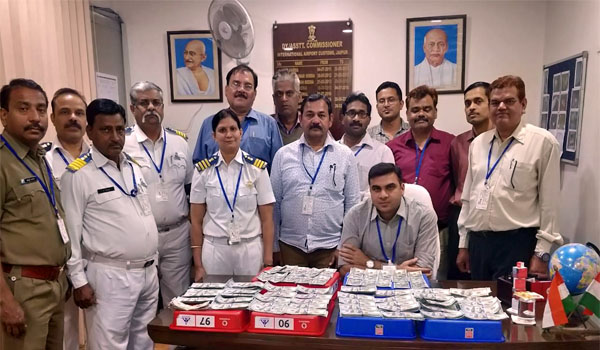 The duo was attempting to smuggle the currency into Bangkok via Thai Smile flight at Jaipur airport when the intelligence officials caught them.

The airport intelligence team became suspicious when they spotted odd behavior of the accused men in the security check zone. After the security scan, they detected the money.

According to the police, the men have been taken into the police custody and the customs officials are questioning them regarding the purpose and the gang they are part of.

They were attempting to smuggle foreign currency from the Thai flight numbered WE344 to Bangkok. The duo will be produced in the court, added officers.

Further investigation is on.

Several cases of smuggling of gold, opium, foreign currency, and other things have come forth at the Jaipur airport over the past years.

The smugglers have made Jaipur airport a mid-spot for smuggling. Intelligence teams are keeping a close tab at these illegal activities and are alert due to an increase in smuggling from other countries.

Also, the customs department officials have caught several people smuggling gold at Jaipur airport in the past two years. The graph of the smuggling in the year 2018 and the initial months of 2019 has increased to double as compared to 2017-18.