The incident took place at Murtikala Colony in Gopalpura Bypass area. The girl was on her way to get milk from a dairy near her house early morning on Thursday when she was kidnapped by a biker 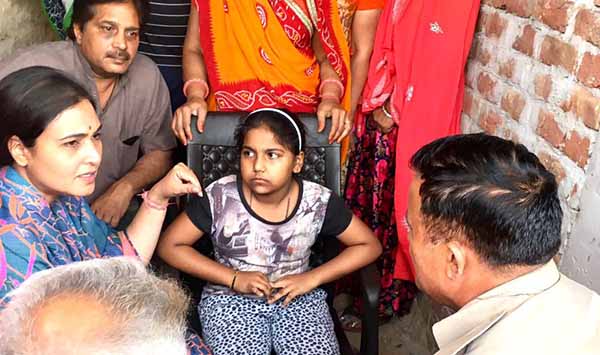 The 9-year-old girl who was kidnapped by a biker at Murtikala Colony near Gopalpura Bypass.

Jaipur: A 9 -year-old girl showed extraordinary courage and foiled an attempt to kidnap her in Jaipur. The girl was on her way to get milk from a dairy near her house early morning on Thursday when she was kidnapped by a biker. She fought with him even when he attached her with a torch-shaped iron object and escaped. The police smelled a foul play initially, but had to admit that the incident took place after the footages of CCTVs installed in the area showed the biker forcefully taking away the girl.

Kindap Video: Footages of a CCTV showing a biker kidnapping the girl.

“The girl had left home to get milk from a dairy around 5 am. A biker stopped her on the pretext of asking directions. He forcefully got her on the bike and drove away,” said a police officer.

The girl started fighting with the kidnapper who found it difficult to control the bike. He had to stop the bike at Triveni Nagar flyover.

The girl escalated her attacks on the kidnapers and started screaming. To scare her, the biker attacked her with an iron object. The girl sustained injuries, but continued to resist. When he couldn’t start the bike, he dumped the girl. She ran towards the direction of her home, crying for help. The man was wearing helmet and glasses.

The family members saw the girl out of breath when she reached home. She told them what had happened following which the police were informed. A police team from Bajaj Nagar police station rushed to the girl’s house and recorded her statement.

“We have obtained footages of some CCTVs showing the girl being kidnapped by the biker. We are trying to identify the kidnapper. Further investigation is going on,” said the officer.