Bollywood actor – Irrfan Khan –revealed the rare disease that he is suffering from on Twitter on Friday. 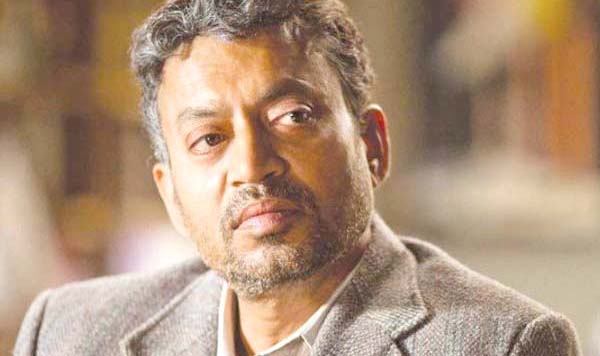 Jaipur: Bollywood actor – Irrfan Khan –revealed the rare disease that he is suffering from on Twitter on Friday. He said that he has been diagnosed with Neuroendocrine Tumor and will leave the country for a while for the treatment.

As the news of the official confirmation by the actor about his disease spread in Jaipur, his fans wished him recovery.

“There had been a lot of rumors. People were saying all sorts of things like he has brain cancer and all. As Irrfan had promised on Twitter, he revealed the disease. He is fighter. He will recover soon,” said Mohammed Anas, a resident of Ramganj area in Jaipur.

His another fan, Mukesh Saini, said that he had been praying since the day the actor revealed on Twitter last week that he was suffering from some rare disease.

“I have had sleepless nights since then. How can the life be so cruel,” said Saini.

In a statement, the actor who belongs to Jaipur, tweeted on Friday, “The unexpected makes us grow, which is what the past few days have been about. Learning that I have been diagnosed with Neuroendocrine Tumour as of now has admittedly been difficult, but the love and strength of those around me and that I found within me has brought me to a place of hope. The journey of this is taking me out of the country, and I request everyone to continue sending their wishes. As for the rumours that were floated NEURO is not always about the brain and googling is the easiest way to do research 😉 To those who waited for my words, I hope to be back with more stories to tell.” 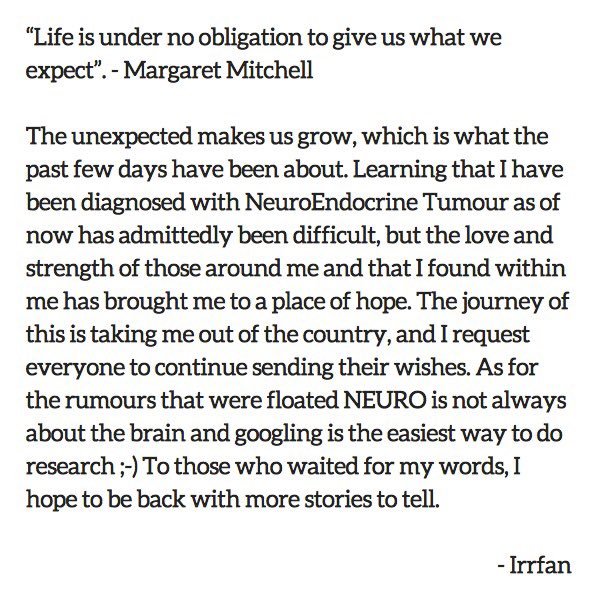 People have been speculating about his health since the day he revealed that he was suffering from a rare disease. He earlier tweeted,

“Sometimes you wake up with a jolt with life shaking you up. The last fifteen days, my life has been a suspense story. Little had I known that my search for rare stories would make me find a rare decease,” the actor tweeted.

He added, “I have never given up and have always fought for my choices and always will. My family and friends are with me and we are working it out the best way possible. In trying times, please don’t speculate as I will myself share with you my story within a week – ten days, when the further investigations come with a conclusive diagnosis. Till then, wish the best for me”.

Though he requested not to speculate, the tweet scared his fans in Jaipur.

Irrfan was born and brought up in Jaipur. He has been fond of movies since his childhood. After completing graduation from Jaipur, he enrolled himself in National School of Drama. Her mother wanted him to become a professor. Irrfan lied to his mother and told her that he would fulfil her wish after graduating from NSD. When he was in the third year, he was signed for a lead role in a movie by Mira Nair.