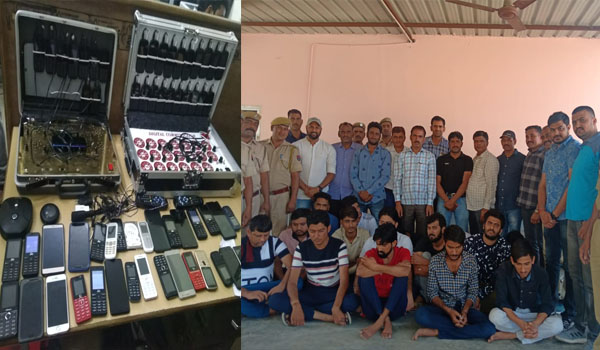 Jaipur: The crime branch of Jaipur police arrested 14 members of a betting racket who were allegedly taking betting money from people for the IPL 2019 matches. The police carried out a raid in a flat of My Haveli near Bhankrota near Jaipur-Ajmer highway on Tuesday and busted the gang.

Police got a tip-off about the gang operating in the flat number 1239 and 3540 of Unique Builders – My Haveli located on Jaipur- Ajmer highway on Tuesday.

The crime branch of Jaipur Commissionerate constituted a special team to carry out a search.

According to the police, a register was recovered from flat in which betting records of Rs 1,77,25,508 was found. Another record in their hard disk suggesting betting transactions worth crores of rupees was also recovered.

The accused took bets from people who placed their money on the match through different mobile numbers, added officers.

The men are in police custody and the officers are interrogating them. Further investigation is going on.

Police have booked them under several sections of IPC including cheating and forgery.

Similarly, Jaipur police arrested seven men for betting on the ongoing IPL 2019 matches near Jaisinghpura Road in Jaipur on Saturday night. The accused men are the residents of Ajmer and came to Jaipur about 15-20 days ago for the betting purpose. Police recovered mobile phones, laptops, cash and several things from them.

Police are keeping a close eye on betting rackets active during the IPL matches.