Over the years, the International Kite Festival of Jaipur has become one of the most attended festivals in Rajasthan. The city experiences huge participation from several people and professional kite fliers during the event. 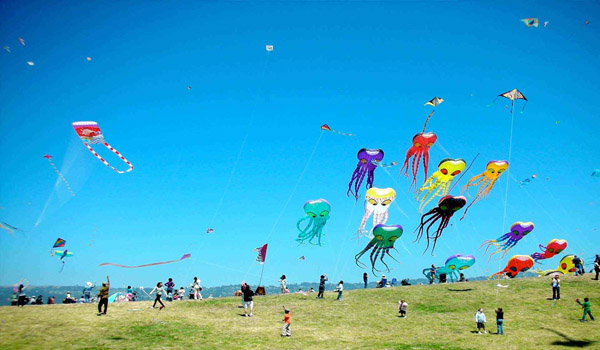 Jaipur: Jaipur is all set to celebrate the International Kite Festival (IKF-Jaipur) 2019 from January 14 to January 16. The festival is supported by Rajasthan tourism department. Celebrations of the three-day long kite festival will begin at Jaipur Polo ground on January 14 and will conclude at Umaid’s Bhavan Palace in Jodhpur with a prize distribution ceremony on January 16. Kite fliers from different parts of the world will come and take part in the competition at the International kite festival of Jaipur. The entries for the competition have already started by the state’s tourism department. Over the years, the International Kite Festival of Jaipur has become one of the most attended festivals in Rajasthan. The city experiences huge participation from several people and professional kite fliers during the event. The festival is divided into two segments, one is ‘Kite war’ and the other is ‘Friendly kite flying’ session. Apart from the kite flying competition, cultural programmes including Rajasthani Dance performances, musical bands, fun fairs, decorated kites’ exhibitions, Rajasthani delicacies such as Gajak, kheer, Ghevar, Pakodi, Puwa, til-paati and many more are the big part of the three-day long IKF festival in Jaipur. The festival spreads an aura of joy, colors, and thrill with its vibes. The International kite festival is organized at different parts of India on the occasion of Makar Sankranti aka Uttarayan, which is a Hindu festival celebrated on January 14. It is the first festival of the new year that symbolizes the welcoming of the new season of harvest and is celebrated with singing, dancing, kite flying and enjoying cultural events such as fairs (male). Flying Kites is a custom which is associated with the Festival Makar Sankranti. Crowded rooftops, colorful skies, kite competitions, delicious food items, the sound of music and people shouting ‘Wo kaate’ is what you will experience on the occasion of Makar Sankranti in Jaipur. And to experience all of these at one place you will have to come to International Kite Festival in Jaipur’s polo ground on January 14.
Follow @ThePinkcityPost