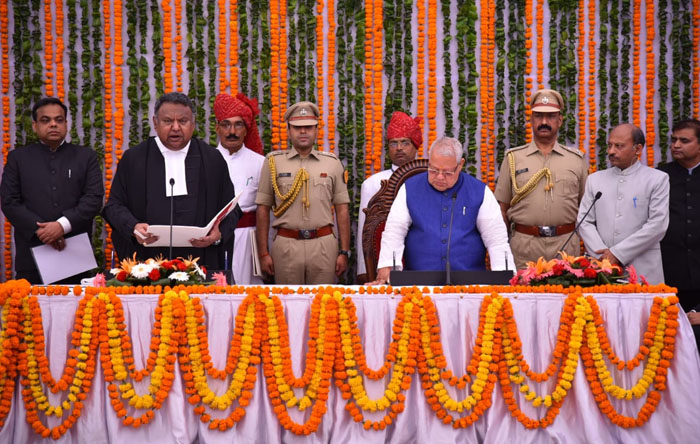 New CJ of Rajasthan high court Indrajit Mahanty being sworn-in by the governor.

Several dignitaries including Chief Minister Ashok Gehlot attended the ceremony. Chief Secretary DB Gupta read out the warrant sent by the President for the appointment of Justice Indrajit Mahanty as Chief Justice. After that the Governor administered him the oath of office.

The newly appointed Chief Justice said that providing justice to the poorest of the poor would be their priority. Indrajit Mahanty talked to the media after the ceremony and said his greatest success would be to successfully serve the people of Rajasthan. He added that he would leave no unturned to achieve this. He also said that bringing transparency in the justice and reducing the pendency of cases would some of his top priorities. He said that he would discuss with the government and the government how to work towards the common goals of brining speedy justice to people.

Before being appointed chief justice of Rajasthan, Justice Indrajit Mahanty was working as a senior judge in the Mumbai High Court. He has replaced Justice Ravindra Bhatt who was recently appointed a judge in the Supreme Court.