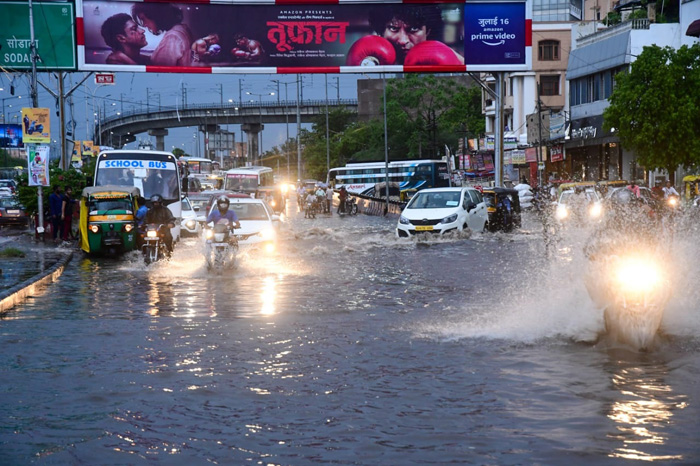 Waterlogging on Ajmer Road after heavy rains on Monday

Jaipur: The city residents got some respite from humidity and heat after heavy rains lashed most parts of the city for nearly 30 minutes on Monday.

Waterlogging was reported throughout the city after the rains for such a short period of time. Many vehicles got stuck on roads in the low-lying areas of the Walled City. Houses and shops were also flooded.

The rains, reported on the first Monday of Shravan month brought down the temperature and provided a brief respite from the humidity. It started raining around 6 pm. Many people who were returning home from the office got stuck on the way. They were seen looking for shelter.

Despite the inconvenience caused by water clogging, people welcomed rains. Children enjoyed the showers on rooftops and in the streets. Showers were reported in most parts of the city including Jalmahal Road, Tonk Road, Sikar Road, JLN Marg, Ajmer Road, Agra Road, Vidhyadhar Nagar, Muralipura, and Vaishali Nagar.

Jaipur had witnessed heavy rains on July 11. At least 11 people were killed and several others were injured in a lightning strike.

Met department officials said that heavy rains would continue to lash several parts of the Jaipur division over the next 2-3 days. State Disaster Relief Force (SDRF) has been put on a high alert.

Earlier in the day, huge crowds of pilgrims were reported at Shiva temples in the city. People thronged the temples to offer prayers on the first Monday of Shravan month.