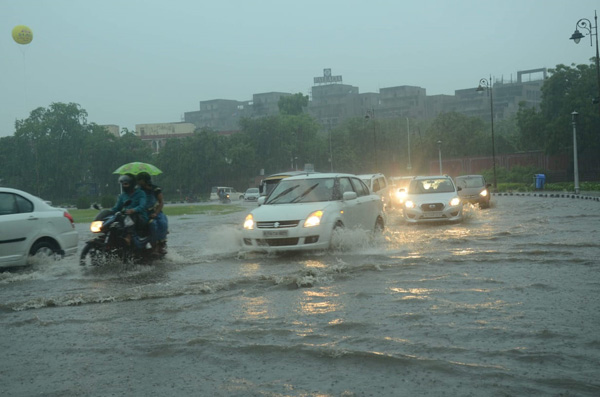 Heavy rains in Jaipur throws normal life out of gear.

Jaipur: Heavy rains affected normal life and created flood-like situation in many parts of Rajasthan including Sikar and Alwar districts on Friday. Several schools declared leave for students of primary classes – from LKG to class 5 – in Jaipur. Acting on the direction of the district collector, the district education officer empowered school administrations to declare a holiday in affected areas.

After the met department sounded an alert, the state administration geared up for any emergency situation. Drains overflowed and the roads were inundated with water due to heavy rains in Jaipur since Thursday night. People couldn’t reach their offices due to traffic jams and water clogging on the roads in the morning. Some incidents of building and homes caving in were also reported in the city.

At five people were reported in rain-related mishaps in Sikar where the flood-like situation has wrecked havoc. Many teams of state disaster relief force (SDRF) were rushed to Sikar from Jaipur. SDRF teams are also keeping a watch on the situation in 19 other districts.

A child was reported missing in Govati village of Sikar district nearly 30 hours ago. SDRF teams have been searching for him, but they are still clueless. It is suspected that he was swept away by rain water while playing in a low lying area of the village.

The traffic on Amer Road was diverted after the rain water inundated the road running parallel to Jal Mahal. The newly constructed Ring Road was damaged at several places in the heavy rains.

The Met department has issued a warning that heavy rains may affected normal life in 23 districts of the state over the next 24 hours. These districts include Ajmer, Baran, Alwar, Banswara and Jaipur.