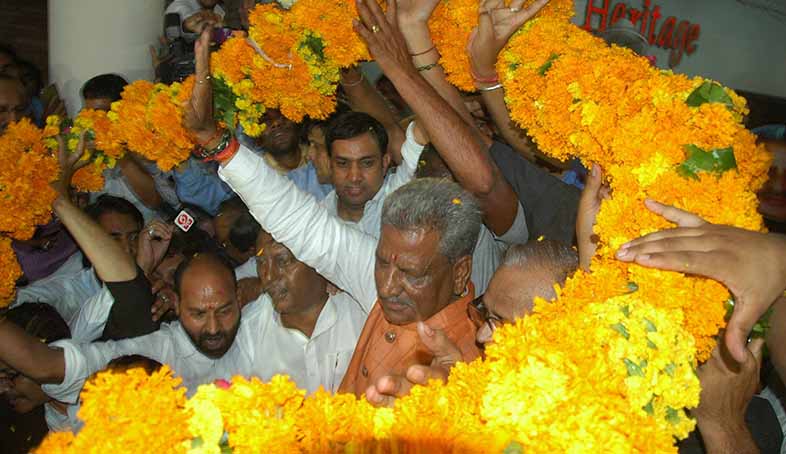 Jaipur: When the cavalcade of BJP’s national vice president and UP state in-charge Om Mathur reached Jaipur from Delhi on Friday, the enthusiasm of his supporters was quite spectacular. In front of his residence on Ajmer Road in the city, the supporters shouted slogans enthusiastically – ‘hamara CM kaisa ho, Om Mathur jaisa ho’ (Who should our chief minister be? It should be Om Mathur).

After watching this obvious show of strength by Mathur, media persons rushed to BJP’s state unit office where president Ashok Parnami assured them that the talks about a change of guard in Rajasthan are nothing, but rumours.

“Vasundhara Raje ji will continue to be our CM. All these talks about a change of guard in Rajasthan are baseless and have been fueled by rumours on social media,” Parnami said.

He further said that BJP won in Rajasthan by projecting Raje as chief minister, so she will hold the office until her term comes to an end.

In fact, Mathur also brushed aside these ‘rumours’. “I have not been asked to be the state’s chief minister. These are all baseless rumours without even a shred of truth in them,” Mathur told media persons.

Mathur’s supporters are however going out of the way to credit their leader with the massive victory of BJP in Uttar Pradesh. They are apparently trying to draw the party high command’s attention towards the fact that the time has come to reward Mathur for his dedication and hard work.