GST will be more than a game changer: Rajasthan industry minister

More than 5.2 traders and service providers in Rajasthan have already applied to register their business under GST. 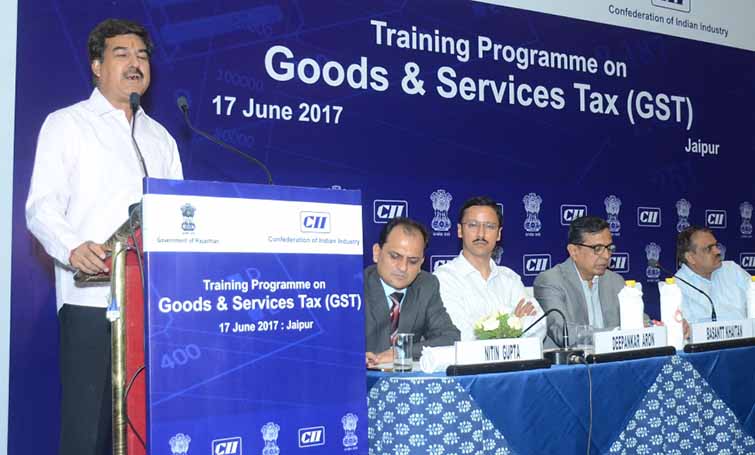 Jaipur: More than 5.2 lakh traders and service providers in Rajasthan have already applied to register their business under goods and service tax (GST) that will come into effect from July 1, informed Rajasthan minister of industries Rajpal Singh Shekhawat. He was addressing a one-day training workshop on GST organized at Hotel Clarks Amber in Jaipur on Saturday. The workshop had been organized by Confederation of Indian Industry in association with Rajasthan government’s finance department.

Nearly 300 people from 10 different districts participated in the workshop .

“People are saying that GST is a game changer, but it is much more than that. It will change people’s luck. Countries which have adopted GST system have witnessed exponential growth in GDP. India too will witness at least 2 percent increase in GDP,” said Shekhawat.

The minister said that nearly 3.5 lakh businesses have been already registered under GST in Rajasthan. “It’s the biggest tax reform India has ever witnessed. It will prove complex for those evading taxes and who don’t keep their books straight,” Shekhawat said.

CII Rajasthan state council chairman Bansal Khetan said that GST is tax system that doesn’t differentiate between goods and services. “It will increase competition and result in quality improvement and export. Manufacturers and exporters will particularly benefit from this,” said Khetan.

Managing Partner, Athena Law Associates, Dr. Pramod Kumar Rai said that GST is rightly being called a game-changer. However, there is a need to demystify GST as it is being feared by the people. It will only be complex for those who do not account for their goods and services. He further said that the new tax system will be uniform throughout the country and will have in place a strong compliance system.

The inaugural session ended with an open house session. The participants asked questions relating to taxes on selling of cattle at the fair; e-way bill, tax rate on wires and cables, C-forms, among others.