Government is stifling voice of farmers: Rahul Gandhi in Banwara 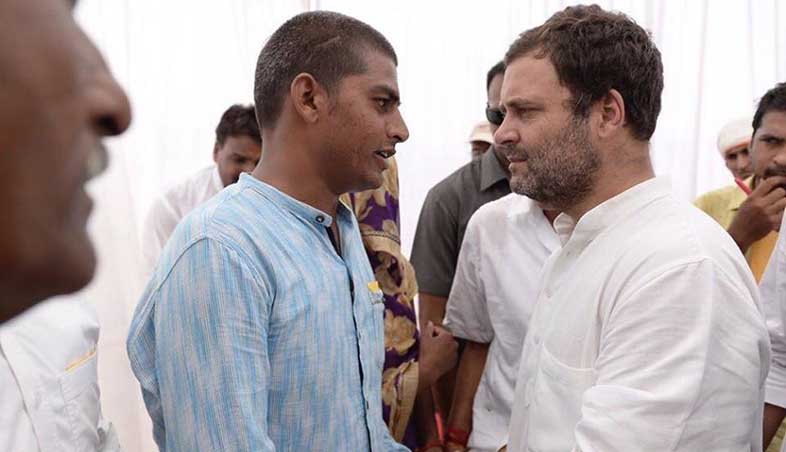 Jaipur: Congress Vice-President Rahul Gandhi held a farmers’ rally in Rajasthan’s Banswara district on Wednesday. Addressing the farmers, Gandhi said it was an irony that the BJP government could open the gates of the Parliament for launching GST at midnight, but it doesn’t have 10 minutes to discuss the plight of farmers. Gandhi urged the state Congress workers to put pressure on the BJP government in Rajasthan so that it pays heed to the problems of farmers.

The protest was named Kisan Aakrosh rally. Gandhi’s public meeting with farmers is being seen as a step towards gearing up for the assembly elections in Rajasthan, scheduled to take place next year.

Rahul Gandhi said that he was in the parliament in the morning.

“We had sought just 10 minutes to raise the voice of farmers. We had not asked for 2-3 hours. But we were not allowed. The gates of parliament were opened for GST at midnight, but the government doesn’t have10 minutes for farmers. It is quite clear that the voice of farmers is being suppressed,” said Gandhi.

Gandhi lashed out at the promises of employment generation made by the BJP government.

“They had told us that they would generate 2-3 crore jobs, but when asked how much job they generated, they now say one lakh. The government didn’t give employment. Instead it snatched away farmers’ land,” said Gandhi.

He said that the Congress would pressurize the government to waive off loans taken out by the farmers.

Sachin Pilot said that farmers were committing suicide in Rajasthan every day and the state government was doing nothing. Sixty farmers ended their lives in the past one year, he said.