The gold had been seized in an income tax raid at a prominent jeweller of the city recently. The thieves broke open a gate in the rear part of the office to gain entry. After damaging the CCTV footages, they committed the gold theft 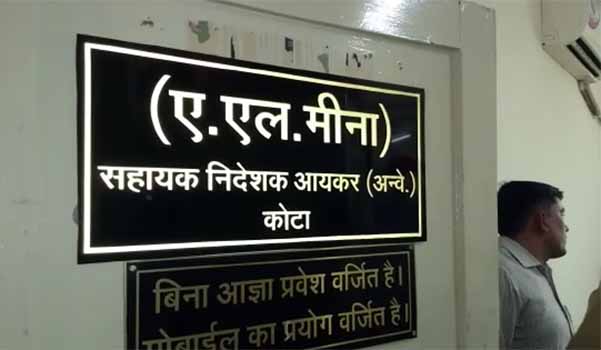 Income tax office in Kota where gold theft was committed.

Jaipur: Kota police on Sunday arrested three men for stealing gold worth nearly Rs 2.93 crore from the income tax office in Kota. The accused include a computer operator posted at the I-T office. He along with his two friends stole the gold that had been seized during an income tax raid at three prominent jewellers in Kota recently and was being kept in the office, police said. The police have recovered the gold. The trio had distributed the booty and each one of them was hiding his share at his home.

Those arrested were identified as Ravindra Singh (24) alias Vikki, Vikash Khateek alias Ravi (22) and Ashish Samaria alias Ashu (23). Ravindra worked as a computer operator at I-T office in Kota. He knew where the gold had been kept in the office after the raid. All the three accused were currently living in Mahaveer Navar colony in Kota. Ashish is a delivery boy at an e-commerce company.

“Since the gold was seized on a weekend, the I-T officials could not deposit it in the treasury. It was being kept in a cupboard in the office of an assistant director in the department,” said a police officer.

Ravindra and the two friends hatched the plan to rob the gold at the flat of Vikas while celebrating in a birthday party.

“They had tried to rob the gold on Friday night also, but they couldn’t due to the alterness of the security guard. They then decided to gain entry into the building by jumping over a wall in the backyard,” said the officer.

The police came to know about the gold theft on Sunday. Senior I-T officials informed that unidentified thieves stole gold worth nearly Rs 2.93 crore on Saturday night. The thieves broke open a gate in the rear part of the office to gain entry. After damaging the CCTVs, they committed the gold theft.

After the income tax officials seized the gold in a raid conducted at a jeweller, it was being kept in the almirah of Income Tax assistant director, Kota AL Meena. The official said that some unidentified thieves sneaked into the office sometime on Saturday night and stole the gold even though the premises is guarded by a security man during the night.