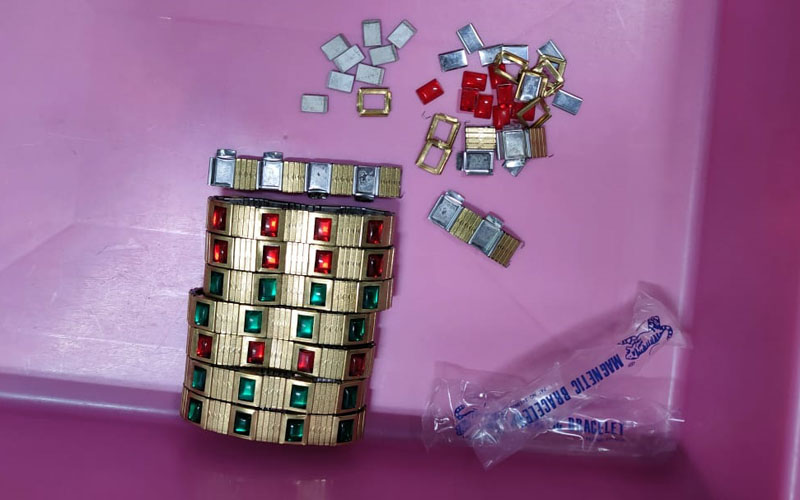 Magnetic bracelet found in possession of the passenger.

Jaipur: The customs department on Saturday seized gold worth Rs 16 lakh from a passenger who arrived at Jaipur International Airport from Dubai. The gold weighing about 292 grams was hidden in magnetic bracelets. The passenger is being quizzed, the officials said.

The passenger arrived in Jaipur via Air India Flight No. IX 196 from Dubai around 4.55 pm on Saturday. His behaviour raised suspicion so the customs officials searched his luggage.

“On examination of his checked-in baggage in the x-ray machine, dark images of some objects inside magnetic bracelets were noticed. On further inquiry, the passenger denied being in possession of any such items. However, eight magnetic bracelets were found in passenger’s check-in baggage and on dismantling these bracelets, 64 pieces of gold in square and rectangular shape with white rhodium polish and plating were found concealed inside the bracelets,” said a customs department officer.

The passenger was taken into custody for further interrogation. The smuggled gold, collectively weighing 292.270 grams, valued at Rs.15,95,794, was recovered which has been seized under the provisions of the Customs Act, 1962, the officer said adding that further investigation is going on.

Many cases of gold and drug smuggling have come to the fore at Jaipur International Airport. Most of the people who were caught were carriers. The agencies are investigating to bust the network of smugglers.