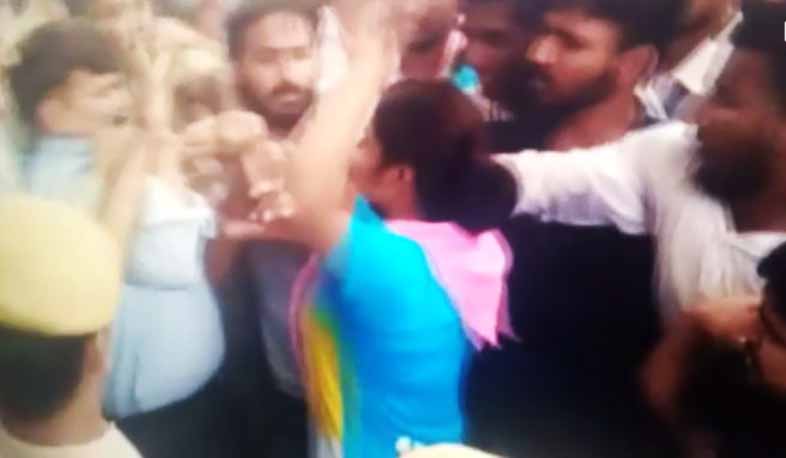 A girl identified as Pooja Varma, slapped professor RN Sharma during a student protest by NSUI and then manhandled him.

Jaipur: The law student Pooja Verma who allegedly slapped a professor during a NSUI protest at Rajasthan University (RU) two days ago was banned from attending classes. An FIR has also been lodged against her with Gandhi Nagar police station.

Pooja was accused of slapping RN Sharma during a student protest by NSUI and then manhandled him. She became so uncontrollable that others had to pull her away from the professor.

The video showing Pooja slapping the professor who was surrounded by a group of unruly students had gone viral on social media channels.

The incident took place outside VC secretariat on Monday. A group of students, allegedly led by some NSUI student leaders, were protesting. Their demands included increase in PG seats, rectifying BCA results, appointment of a VC and election for all four posts in constituent colleges of RU.

The students tried to enter the VC secretariat, but police stopped them.

The professor came to the students to placate them and assure them that their demands would be looked into, but he was surrounded.

Pooja allegedly held him by his shirt and slapped him and then started manhandling him.

NSUI leaders later said that the girl was not with NSUI.

Police had to resort to a mild lathicharge to disperse the crowd of students.