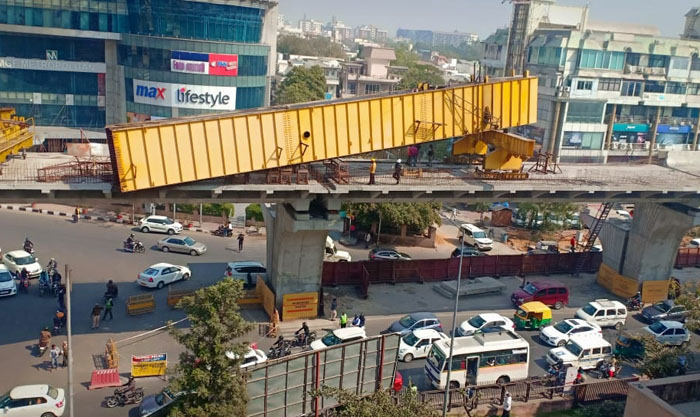 A launcher (crane) drooling over the road at 22 Godown Circle while the traffic moves.

Jaipur: A heavy girder launcher (a crane used in the construction of bridges) being used for the construction work at the Elevated at 22 Godown Circle fell off the bridge damaging it. Had it fallen on the road, it could have been catastrophic as it is one of the busiest roads in the city, situated in close proximity to the state secretariat, high court and assembly buildings.

The JDA is constructing Elevated Road at 22 Godown Circle. A part of the launcher suddenly came loose and dropped over the bridge. The bridge was damaged. Many people witnessed this incident, creating panic among commuters. There are two big shopping malls and a multiplex nearby. The traffic policemen who were on duty at the circle at that time stopped the traffic and informed the senior JDA officials. A team of engineers rushed to the spot.

The traffic has been diverted and the affected area under the bridge has been cordoned off.