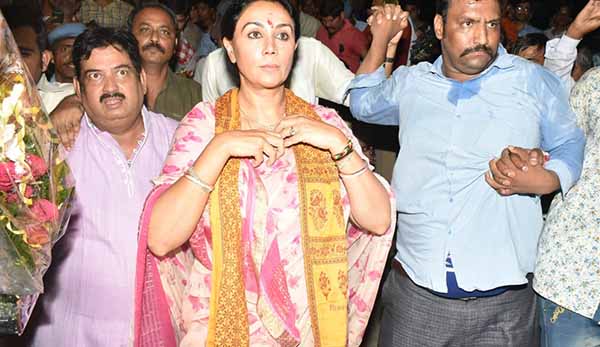 Newly elected MP Diya Kumari extended a warm welcome on her arrival to Jaipur on Friday.

Jaipur: After the BJP got a thumbing victory in Rajasthan winning all the 25 Lok Sabha seats, the speculations are ripe about the winners who will be included in the Narendra Modi cabinet. At least five newly-elected members of parliament (MP) are the frontrunners including Diya Kumari, Hanuman Beniwal, Rajyavardhan Singh Rathore, Gajendra Singh and CP Joshi.

Three woman candidates from the BJP won the election. Among them, Diya Kumari is the strongest candidate for the inclusion in the union cabinet. She has been an MLA from Sawaimadhopur and won the current Lok Sabha elections from Rajsamand. Being a member of the ex-royal family, she has a strong influence in Jaipur. Her inclusion in the cabinet will strengthen the BJP in all these three places.

Diya was given a warm welcome today on the arrival from Rajsamand on Friday. Amid victory slogans, garlands and fireworks – Diya Kumari walked in a procession from the Tripolia Gate to her residence, Chandra Mahal. She thanked the people of Jaipur for their wishes.

Another strong candidate is Hanuman Beniwal who has emerged as a prominent Jat leader in the state. He represents the Jat community, a strong vote bank for the political parties in the state.

Rajyavardhan Singh Rathore is considered very close to Modi. He was made union minister for information and broadcast and also sports during the previous Modi government. It is believed that his cabinet berth is certain.

A meeting of NDA MPs will be held on Saturday evening.

Five MPs were included in the Modi cabinet during the previous BJP government.