Ajay Jaitpura had been brought to the court for a hearing when the broad daylight firing took place. It created panic among people in the court as they ran for cover.

Firing in Rajgarh court of Churu. Video grab of the shooter.

Jaipur: Armed men opened fire inside the chambers of a munsif magistrate court in Sadulpur town (also known as Rajgarh) of Churu district on Wednesday, leaving a history-sheeter, identified as Ajay Jaitpura critically injured. He later died at a hospital. Two others - his lawyer, Ratan Lal Prajapat, and another criminal Suraj Gujjar - also sustained bullet injuries. They were rushed to a hospital in Hisar. Watch the CCTV footage video below:
https://youtu.be/l-iIMPD_wl0
Ajay Jaitpura who had been released on bail nearly 12 days ago after serving time in a jail for two years had come to the court for a hearing when the broad daylight firing took place around 1 pm. An employee of the magistrate chambers was working. The megistrate was not seated at that time. The employee had to jump into another room to rescue himself. It created panic among people in the court as they ran for cover. A part of the firing scene was caught on a CCTV installed in the court premises. The police are trying to identify the shooters on the basis of the footages, but said that the target of the firing was Ajay Jaitpura and it was apparently the fall out of a gang rivalry. Read Also: Sadulpur court firing: Ajay Jaitpura dies at hospital 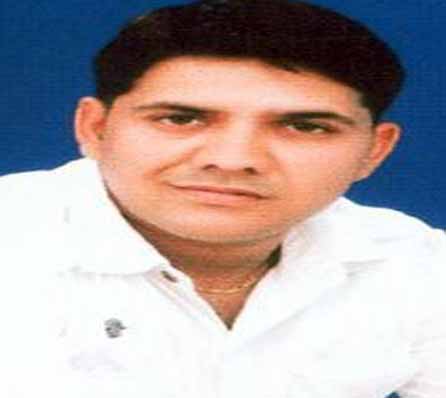 Ajay Jaitpura who was shot at in Rajgarh court firing.

The number of shooters was at least four. A police team rushed to the spot after the firing. The CCTV footages show a man brandishing a gun. Several rounds of bullets were fired. The getaway vehicle was a jeep that the criminals had parked outside the court. Police barricades have been put on the border areas, but the shooters are yet to be traced. A firing incident had been reported in the same court in 2002. One man, Sumer Fagedia, was shot dead. Ajay Jaitpura had been arrested by Churu police in February, 2016. He was carrying a cash reward of Rs 10,000 on his head. At the time of his arrest, he had 34 cases registered against him with Churu, Jhunjhunu and Haryana police. He was staying in a rented accommodation in Jaipur from where he was nabbed. In September, 2015, he had attempted to mow down some policemen in Hamirwas police station area. In this case, Sadulpur ADJ court had sentenced him to seven years imprisonment. Rajasthan high court granted him bail on January 5. A Facebook profile being run in the name of Ajay Jaitpuria had hinted at the possibility of his murder by his own people. The post was updated on January 15: It is suspected that a Haryana-based gang is involved in the broad daylight murder of Ajay Jaitpura. Ajay was a member of this gang in the past. The gang's kingpin Anil Jat was killed in a police encounter. The gang accused Ajay of being the police's information, helping them locate Anil. Ajay had been getting threats since then. Read Also: Sadulpur court firing: Ajay Jaitpura dies at hospital Note: Want to share this story with someone? Just click on the WhatsApp or Facebook icon below:
Follow @ThePinkcityPost