It took rescue teams more than four hours to find the victims and rush them to hospitals. 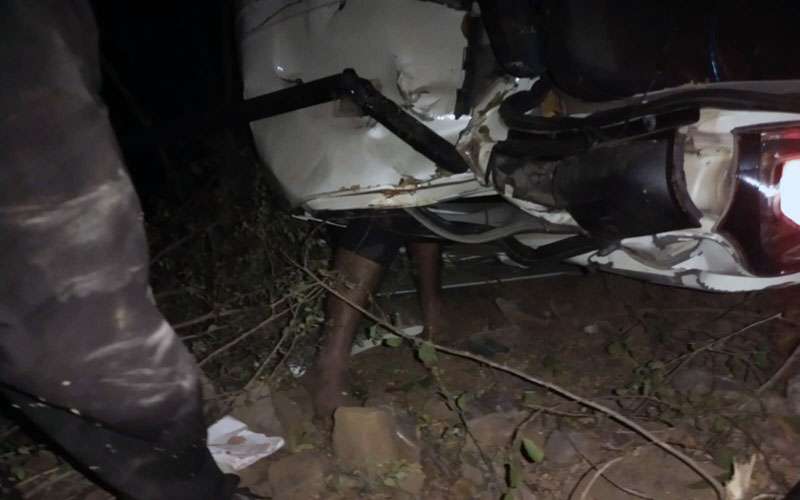 Rescue teams trying to rescue five friends who fell into the gorge near Nahargarh Fort.

JAIPUR: A 28-year-old man, working as a firefighter, was killed while his four friends were injured when their SUV fell into a 500-feet deep gorge while they were driving down from Nahargarh Fort around 3 am on Wednesday. It took rescue teams more than four hours to find the victims and rush them to a hospital. The condition of the three injured men is said to be serious.

The incident took place around 3 am. Prima-facie, it has come up during the investigation that the car was overspeeding when coming down from the Nahargarh Fort. When the car fell into the gorge, the people living in the neighbourhood heard a loud thud.

The man who died was identified as Deshraj Meena, a resident of Jaipur. He worked as a fireman. The other four were identified as Kotputli residents Dinesh Jat (25), Vikram Kumawat (22), Sanjay Jat (30) and Yatendra Arya (35). They are undergoing treatment.

According to the police, they got the information about the accident from the local resident and could launch a rescue operation around 4 am. It was pitch dark when the rescue operation started, so they faced great difficulty in finding the victims and rescuing them. Dinesh was found trapped in the vehicle. The rescue had to cut open the body of the vehicle to pull him out. He had sustained serious injuries on his head and other parts. All five victims were rushed to SMS Hospital where the doctors declared Dinesh dead.

Yatendra told media persons that he is preparing for competitive exams and staying in a rented accommodation in Mahesh Nagar. The car belonged to Sanjay. He said that the car lost balance at a turn and fell into the gorge.

The deceased Deshraj used to work as a fireman at the fire station located at Meena Ghat Gate. He was also preparing for the railway exam. Deshraj's sister Pratha is in the nursing staff of SMS Hospital.

SDRF Rajasthan Commandant Raj Kumar Gupta said that as soon as the information about the incident was received, the SDRF rescue team deployed at Jalmahal Rural Police Line was rushed to the spot. During the operation, the rescue team found the first youth at 150 feet and two other youths at 200 feet. One youth was near the car and the other was inside.

The leg of one of these youths was buried under the car. The car driver (Dinesh) was found unconscious by the rescue team. Whom the team gave CPR and made him sit in the ambulance. The rescue operation was completed at around 7:25 am.