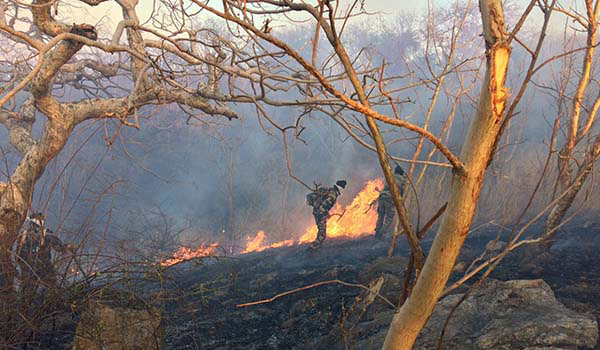 Jaipur: As the temperature is rising in the state with the onset of summer, a massive fire broke out in the forest of Mukundra Hills Tiger Reserve of Kota on Tuesday.

Forest land got engulfed in the fire over an area of 300 acres. It took six fire tenders and eight water tankers to control the fire. No casualties were reported.

Locals saw the flames rising near the Sawanbhado dam of the forest on Tuesday noon. They informed police following which the rescue teams reached the spot.

According to the forest officials, the fire spread due to winds. Forest officials said that no damage to trees and animals has been reported. Only grass around was destroyed.

The reason for the fire is yet to be ascertained, added officials.

Police are interrogating one woman regarding the incident.

A huge crowd of locals gathered around the spot. They were helping the fire tenders to control the fire. A team of 25-30 forest officials was also trying to douse the fire using water and sand.

Nearly 60 percent of the fire could be controlled by late night. It took rescue teams another 6-7 hours to completely control the blaze, said a firefighter.

The authorities were also planning to use aircraft assistance for the incident.

All animals are safe and no one was injured during the accident, said the forest administration.