The fire broke out around noon. The employees informed the police control room following which fire department was put on alert. Fire fighters were rushed to the spot and fire tenders were pressed into service. 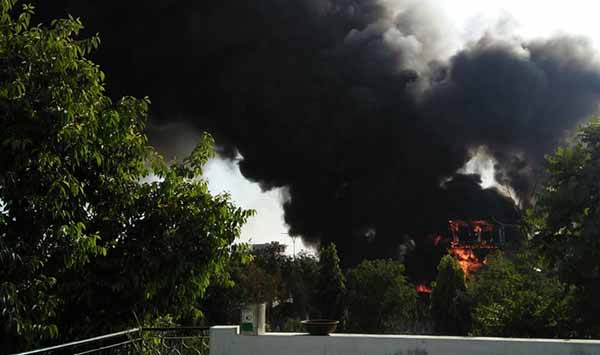 Jaipur: A major fire broke out at one of the factories of Bikaji in Bikaner, creating panic among employees who were working there on Monday. There were no reports of loss of life. Nearly a dozen fire tenders were pressed into service after the fire broke out. Officials said that the efforts were on to douse the fire. The factory is situated in Karani Industrial Area in Bikaner.

The fire broke out around noon. The employees informed the police control room following which fire department was put on alert. Fire fighters were rushed to the spot and fire tenders were pressed into service. Till the reports last came in, the fire fighters contained the spread of fire, but efforts to douse it were still on.

It is suspected that a minor mishap caused the fire. A truck rammed into a boiler installed in the rear portion of the factory, causing the oil to spill to the ground. The oil caught fire following which it spread to the factory.

Senior police and administration officers rushed to the spot to supervise the rescue operations. There were reports that some employees were still working inside the factor when the fire broke out; however they were rescued on time.

“Our focus is to douse the fire. It has been contained to some extent. We will investigate as to what caused the fire. We are recording the statement of people who were inside the Bikaji factory when the fire started,” said a police officer.

It is for the second time that the fire broke out at the same factory. The owner of Bikaji – the popular namkeen brand in Rajasthan and across the country – also arrived at the spot.