Farmer’s income to double by 2022: PM Modi in Jaipur 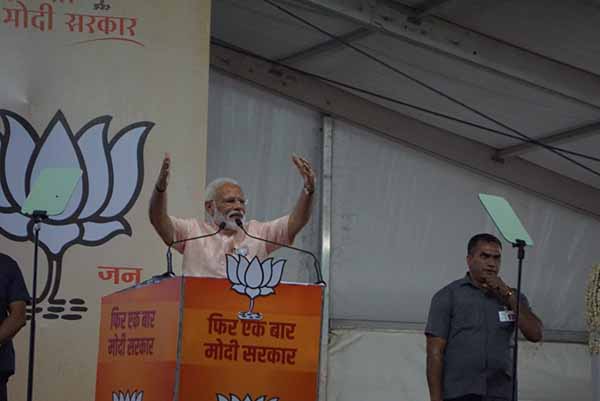 Jaipur: Prime Minister Narendra Modi on Wednesday evening addressed Vijay Sanklpa public rally at VT Road ground in Mansarovar. He lashed out at the Congress accusing it of making false promise of loan waiver to farmers in Rajasthan before every election.

“The Congress had the poster of loan waiver printed 10-15 years ago. They use it before every election. But they never fulfilled their promise. They have done to the farmers in Rajasthan the same. The Congress always tells lies. The posters of removing poverty are in fact being used for the past 60 years, but nothing has been done,” said Modi.

He said that before the BJP government came to power in 2014, families in their bedrooms used to talk about terror attacks and scams all the time.

PM Modi promised to double the income of farmers by 2022. He said that the BJP has fulfilled its promises.

“Nearly 1.5 crore families got concrete homes after you voted the BJP to power in 2014. This time we will ensure that every poor family in the country lives in a concrete house,” said Modi.

The police and district administration had made elaborate arrangements for the rally. Jaipur police commissionerate deputed nearly 2000 policemen to keep an eye on the law and order situation in the area.