The Jaipur dairy administration alleged that the police was not cooperating with the suppliers in some parts of Jaipur. As an estimate, nearly 25 percent of the families in the city didn’t get milk on Tuesday. 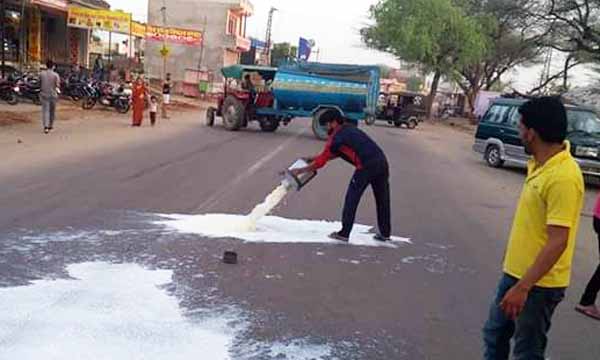 Farmers' agitation: Protestors spilling milk on a road in Jaipur.

Jaipur: Jaipur Dairy administration has registered 20 FIRs over the past four days in connection with damage to its milk supply vehicles in Jaipur by protestors. As protestors are allegedly damaging vehicles used in milk supply and spilling milk on the road, the city has reported a severe shortage of milk. The dairy administration alleged that the police was not cooperating with the suppliers in some parts of Jaipur. As an estimate, nearly 25 percent of the families in the city didn’t get milk on Tuesday.

“Over the past four days, we have registered nearly 20 FIRs, but we are not getting proper cooperation from police at some places. On Monday, some people spilled 5,000 litre of milk on roads in Chaksu area. The dairy employees approached the Chaksu police, but no one from the police station pay attention. They didn’t even come to the spot,” said a dairy officer. The police allegedly refused to lodge an FIR also.

He added that it’s wrong to call the protest a farmers’ agitation because no farmer or political organization has claimed credit for it.

“We have written to the chief secretary and Jaipur district collector seeking cooperation of the administration and police. Nearly 15 milk tenders have been damaged by the protesters so far,” said the officer.

The ‘Goan Band’ agitation by farmers entered fifth day on Tuesday.  Saras Dairy is unable to collect milk from villages, leading to the shortage of milk at dairy booths across Jaipur. The dairy administration has decided not to collect milk through tankers as many vehicles have been damaged by the protestors.

Jaipur Dairy supplies nearly 10 lakh liters milk in Jaipur, but the supply shrank to nearly 4 lakh liters due to the protest.

Vegetable prices have also soared. The vegetable market in Chomu on the outskirts of Jaipur has been closed since the protest began. The wholesale and retail price of vegetables went up by 30%-50%. Many city residents complained that vegetable venders are fleecing people in the name of the agitation.