Farmers are demanding a complete waiver of debts. They threatened that they would stage protests at the Rajasthan state assembly building in Jaipur. 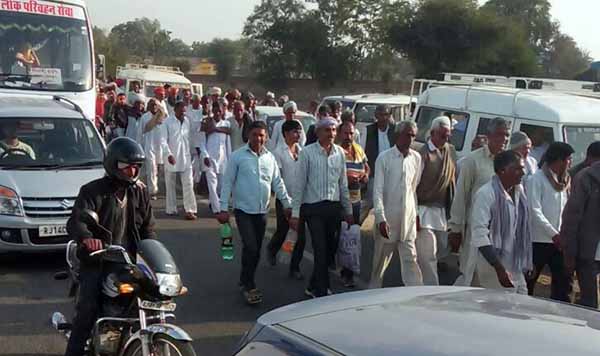 Jaipur: Farmers’ march towards Jaipur has thrown traffic on Jaipur-Sikar national highway out of gear. Thousands of passengers and commuters were left stranded on the highway on Wednesday as the farmers are staging sit-in at different places on the highway. They have blocked the road wherever they were stopped by the police during their march to Jaipur in protest of the arrest of nearly 80 farmer leaders including Amraram.

Farmers are demanding a complete waiver of debts. They threatened that they would stage protests at the Rajasthan state assembly building in Jaipur. The cops started arresting leaders two days ago, fearing a law and order situation. However, the arrests have backfired as the farmers are marching towards Jaipur in groups and wherever they are being stopped by the police, they are staging a demonstration blocking the highway.

According to preliminary reports, the farmers have gathered at Ramu Ka Bas junction near Sikar leading to traffic congestion. More than 300 vehicles are stuck in the traffic jam, causing inconvenience to thousands of people.

The farmers had earlier launched an agitation in Rajasthan on September 13 last year. Traffic jams were reported in Sikar and several other parts of the state for three days.

Though chief minister Vasundhara Raje announced in her budget speech that debts up to Rs 50,000 would be waived off, the farmers are demanding full waiver.

Accusing the state government of not acting on the announcements made after the last agitation, the farmers leaders announced that they would stage demonstrations at the state assembly on February 22.

Several groups of farmers started their march towards Jaipur from Jhunjhunu, Kota, Nagaur and Sikar districts. Some leaders including Amraram and Pemaram were arrested near Chomu.