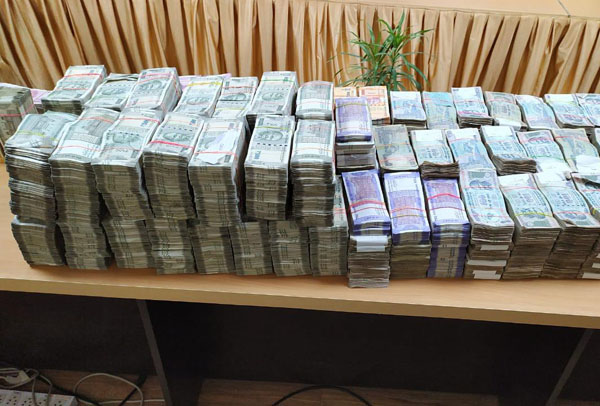 Jaipur: The raids conducted by Enforcement Directorate (ED) in Johari Bazaar of the city along with eight other places have apparently exposed a hawala racket being operated in the name of money exchange.

ED has allegedly recovered documents suggesting that several shell companies were set up in India and Hong Kong for export-import and currency trading. The ED teams seized a cash amount of Rs 4.25 crore and documents indicating hawala transactions of crores of rupees.

According to ED officials, the raids were carried out at the places belonging to Kailash Khandelwal, his brother Kamal and aides MD Bangad and Kunal Laddha at their Johari Bazaar-situated offices and houses and houses in Vidhyadhar Nagar and Hanuman Nagar.

ED suspects that the hawala network used to arrange foreign currencies including USD, Pounds, RMB and Euro at various locations aboard on demand. On the other hand if someone wanted to transfer funds to India from abroad, the same was arranged by the network with the help of people involved in the hawala trade. The funds were transferred using bank accounts or were settled in cash.

ED had initiated investigations under Prevention of Money Laundering Act, 2002 (PMLA) against Arbuda Credit Co-operative Society Ltd and others after Gujarat Police registered a case against them.

It is alleged that Rakesh Kumar and others through Arbuda Credit Co-operative Society and its lured the gullible investors to deposit money in various schemes of the Credit Society, by promising them higher returns.

The entities collected money from innocent people and subsequently siphoned it off through one Ashtha Real Estate and used the same for other businesses and construction of various immovable properties.