Murder was the fall out of a property dispute.

Jaipur: A 50-year-old property dealer, identified as Durgesh Malviya, who was in the past an office bearer in the local BJP unit, was shot dead by unidentified man near Kota railway station late on Thursday night.

A day after the murder, the family members and local residents demonstrated in front of Bheem Ganj Mandi police station on Friday. They placed the body outside the police station and shouted slogans, accusing the police of negligence. They alleged that the police were aware of the property dispute and a threat on his life due to this, but the cops did nothing. They demanded immediate arrest of the culprits.

Police believe that the murder was the fall out of a property dispute. Some suspects have been rounded up.

The victim was with his friend Mangesh Kumawat who is also associated with BJP in Kota. They were outside a Sulabh Complex near Kota railway station when an unidentified man sneaked behind him and fired from a gun. The bullet pierced his head. He died on the spot. 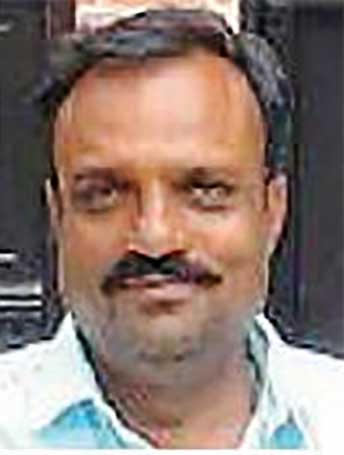 Durgesh Malviya who was murdered in Kota.

By the time, Durgesh’s friend could react, the man who was wearing a helmet, ran away.

The friend rushed him to MDS Hospital where he was declared brought dead.

Some people had grabbed a plot that Durgesh owned and he was trying to get rid of the encroachment.

The police have registered an FIR and rounded up some suspects for interrogation.