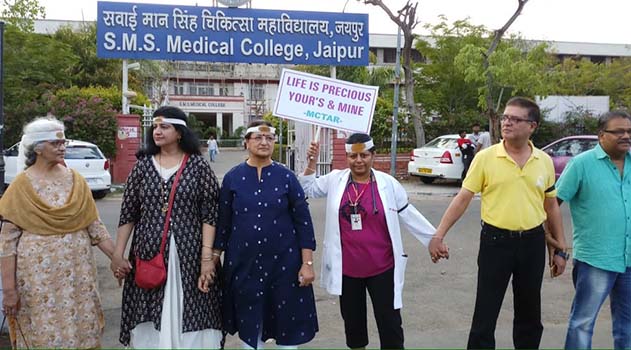 Doctors in Jaipur on strike in support of demands made by their counterparts in West Bengal.

Jaipur: Patients and their family members are likely to be stranded as most government and private hospitals in Jaipur are closed in support of the demands made by doctors in West Bengal.

The doctors’ associations in Jaipur had announced on Sunday that the hospital and medical institutions associated with Indian Medical Association will remain closed from 6 am on Monday to 6 am on Tuesday and only emergency services will be operational. The patients will be attended by the doctors at emergency wards; however, outdoor patient departments will remain closed.

Most organizations are in support of the strike; however, some said that they would decide whether to keep OPDs closed or not on Monday morning.

Those supporting the strike include Private Hospitals and Nursing Homes Society and Medical Teachers Association of Rajasthan.

“We have decided to stand in support of the West Bengal doctors. The private hospitals will remain closed for 24 hours on Monday,” said Dr Sanjay Arya of Private Hospitals and Nursing Homes Society.

He added that the bandh can be extended further if the West Bengal government doesn’t enact the law to protect the doctors.

Hundreds of junior doctors took out a protest rally in support of the West Bengal doctors on Sunday.

Junior doctors in West Bengal are on strike since June 11 after two of their colleagues were reportedly attacked and seriously injured by relatives of a patient who died at the NRS Medical College and Hospital in Kolkata. In a show of solidarity, medical practitioners across the country chose not to work, leaving patients in the lurch.