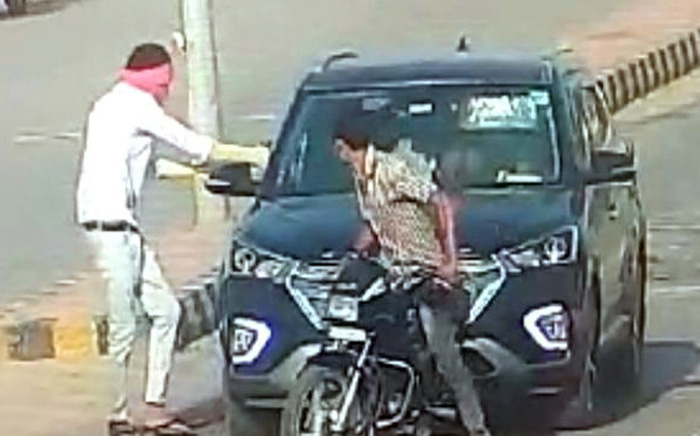 Jaipur: Even a day after a doctor couple identified as Dr Sudeep Gupta and his wife Dr Seema Gupta were shot dead in a broad daylight firing in Bharatpur town of Rajasthan, the police are yet to arrest the two bike-borne shooters. However, the police claimed to have unraveled the story behind the murders and the story is as horrifying as the crime is. An illicit relationship ended up destroying six lives.

As the CCTV footages of the shooting went viral on social media, the cops said that one of the shooters was Anuj Gurjar, while the other was Anuj’s relative Mahesh. Both are still at large.

Anuj is the brother of one Deepa Gurjar who used to work as a receptionist at the clinic of Dr Sudeep Gupta. Dr Sudeep allegedly developed an illicit relationship with Deepa. When Sudeep’s wife Seema came to know about it, she allegedly set Deep and the latter’s 10-year-old son Shaurya on fire. They both were burnt alive. Sudeep and Seema were arrested for the crime and released on bail recently.

The incident took place on November 7, 2019. Anuj, the accused in the Friday firing incident received a call from her sister Deepa Gurjar. She was hysterical and asked him to come to her rescue as she was locked in a room in a burning villa in Bharatpur. The villa was owned by Dr Sudeep Gupta. Anuj drove his bike to the villa and in a failed attempt to save her and her 10-year-old son, he sustained severe burn injuries. He was admitted to SMS Hospital in Jaipur for treatment. Anuj swore revenge and murdered the doctor couple on Friday, according to the police.

On Friday, he and his accomplice Mahesh chased the car in which the doctor couple was travelling to a religious place. The duo intercepted the car and opened fire through the car’s window at the doctor couple. Both died on the spot. The incident took place at Neem Da Gate in Bharatpur city.

It is alleged that when Dr Seema came to know about the illicit relationship between her husband and Deepa, she visited the villa where Deepa was living. After a heated exchange of arguments, she locked Deepa and her son in a room and set the house on fire. Both were brunt alive.