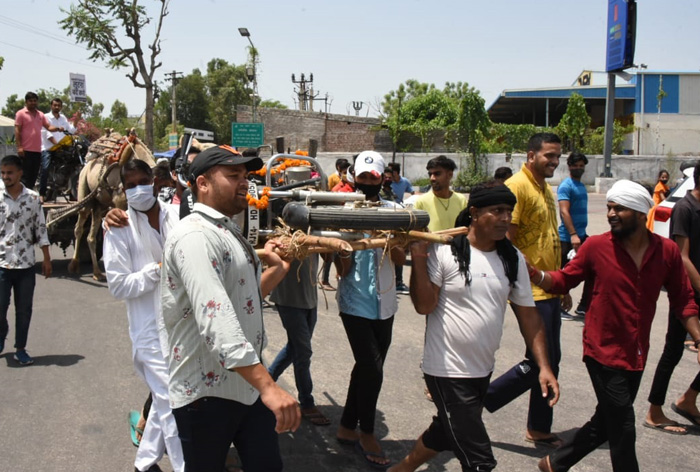 Jaipur: A ban on public gatherings is in effect across Rajasthan to contain the spread of Covid-19; however, political parties are openly flouting these restrictions. On Thursday, hundreds of people including Congress workers took out a rally in support of Congress leader and legislator from Hawa Mahal constituency Mahesh Joshi. His supporters were protesting against the legal action initiated by Delhi police in a phone tapping case. Joshi is named as an accused in the FIR.

As per a notification issued by the state home department, no social, political or religious rallies and gatherings are allowed in wake of the ongoing Covid-19 situation. In a violation of these restrictions, hundreds of supporters gathered in the Walled City and took out a protest rally. The rally was kicked off from MI Road around 8.30 am and passed through several Walled City markets including New Gate, Chaura Rasta, Tripolia Bazar, Badi Chaupar, and Hawamahal Bazar. The cops remained mute spectators as the protestors shouted slogans. They were not wearing masks and flouted social distancing guidelines.

BJP leader and union minister Gajendra Singh Shekhawat had registered an FIR with Delhi police in the phone tapping case. The police sent a notice to Joshi requiring him to appear before the investigation officer for questioning. However, Joshi refused to oblige. Now, his supporters are mobilizing in his support.