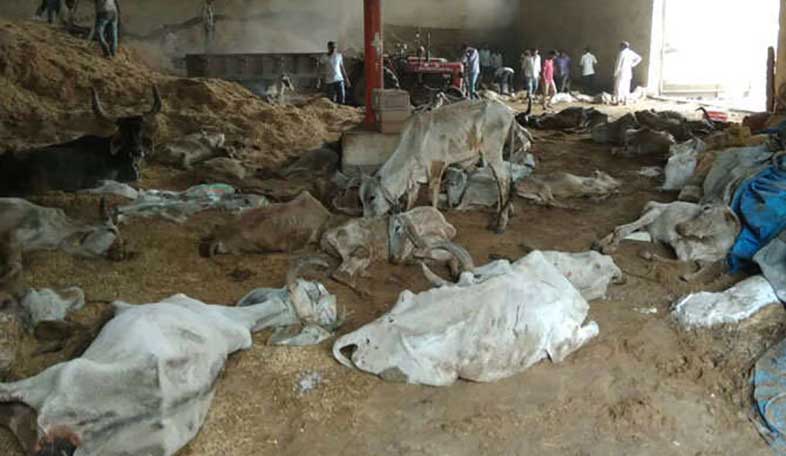 Cows at a gaushala in Rajasthan.

Jaipur: The Rajasthan government has collected over Rs 151 crore from cow protection surcharge on stamp duty that it imposed in April this year.

The revenue figures have come at a time when the BJP-led Rajasthan government is at the receiving end of the opposition parties for death of cows in huge numbers at shelters (gaushalas) in the state.

The government had in April made it mandatory for people to pay for cow protection by imposing a surcharge at the rate of 10% on stamp duty. This ‘cow protection’ surcharge is payable on top of the existing stamp duty rates (non-judicial stamps) when people prepare rent agreements, mortgage papers and lease agreements in Rajasthan.

According to the order circulated by the state government’s finance department, the surcharge is for “the purposes of conservation and propagation of cow and its progeny.”

“In exercise of the powers conferred of the Rajasthan Stamp Act, 1998 and in supersession of this department’s notification, state government hereby orders surcharge at the rate of 10 per cent on stamp duty payable on all instruments for the purposes of conservation and propagation of cow and its progeny,” according to the order.

Senior officials at the Directorate of Gopalan, Rajasthan said that a total of RS 151.60 crore have been collected since the surcharge was imposed.

“We have already distributed over Rs 30 crore from the funds earmarked for cow protection. The money was used for shelters in Jalore, Sirohi, Pali, Jalore and other districts. An additional amount of Rs 10.87 crore has also been released for 155 cow shelters in eight districts,” said a senior official.

The state government is facing flak for the death of hundreds of cows recently. The death toll at gaushalas in Pathmeda and its branches in Jalore and Sirohi was more than 1000 as water from Jalore’s Panchala Dam had entered these sheleters after it was damaged early this week due to heavy rains in Sanchore.

Most heart wrenching to know hundreds of cows in Pathmeda gaushala and other gaushalas have died after Panchala dam was broken…#Rajasthan pic.twitter.com/mpHl5gRcvA

Gehlot alleged the Rajasthan government has been a mute spectator so far.

He said the gaushalas are submerged in water in Sanchore and Jalore areas and there are no adequate arrangements for saving their lives. He said that the central government must take immediate note of the emergency situation and help secure the cows.