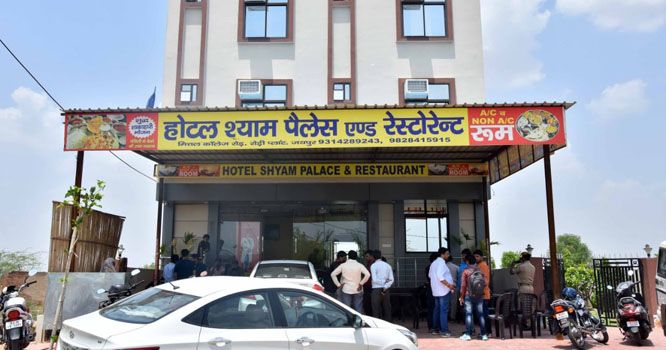 Hotel Shyam Palace in Amer where a couple was found dead.

Jaipur: The bodies of a young man and woman were found in a hotel in Amer area of the city on Sunday. Police suspect that the youth murdered the woman and then the committed suicide. The police have launched an investigation.

The man has been identified as Ratan Jakhar, a resident of Fatehpur village in Alwar district.  The police have recovered a black bag and a country-made gun from the hotel room. The identity of the woman is yet to be disclosed.

The couple had checked into the hotel on Saturday night. They locked the room from inside. When the hotel employees knocked on the door in the morning, they got no response. They informed the police following which a team from Amer police station rushed to the spot.

The body of the man was found hanging from the ceiling of the room, while the woman was found dead on the floor. The police informed the family members of Ratan.

“We are investigating what relationship the couple had. It has come up during preliminary investigation that they were not married. Further investigation is going on. The bodies have been put in the mortuary of a hospital for a post-mortem examination,” said a police officer.