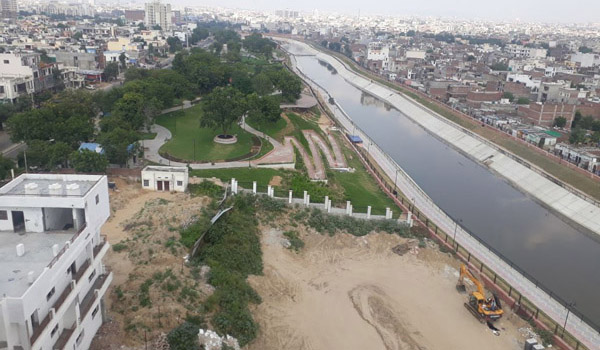 Jaipur: A couple drowned in Dravyavati river near Landscape Park in Shiprapath police station area. According to a preliminary investigation, the woman had jumped into the nullah to commit suicide. The man jumped after the wife to rescue her, but he also drowned. Some people witnessed the incident and reported it to the police.

A police team from Shiprapath police station arrived at the spot after getting the information about the incident from the eye-witnesses. They launched a rescue operation. The drivers fished out the bodies and rushed them to a hospital where doctors declared both the victims dead on arrival. The bodies were put in the mortuary of the hospital for a postmortem examination.

The victims were identified as Madhubala (32) a d her husband Tarun Kumar Singh. They had a fight over some domestic issue. In a fit of rage, the woman jumped into the river. The husband jumped after her, but couldn’t save her. He tried to pull her out of the water but got trapped in the swamp. Both died on the spot.

Preliminary investigation has revealed that Tarun Kumar Singh works as a compounder in Patna, Bihar whereas Madhubala works as a XEN in UP. They both have an 8-month-old baby girl. Both had come to their house in Jaipur seven days ago where Turan Kumar Singh's parents live. The police have launched an investigation to ascertain what caused the woman to take the extreme step.