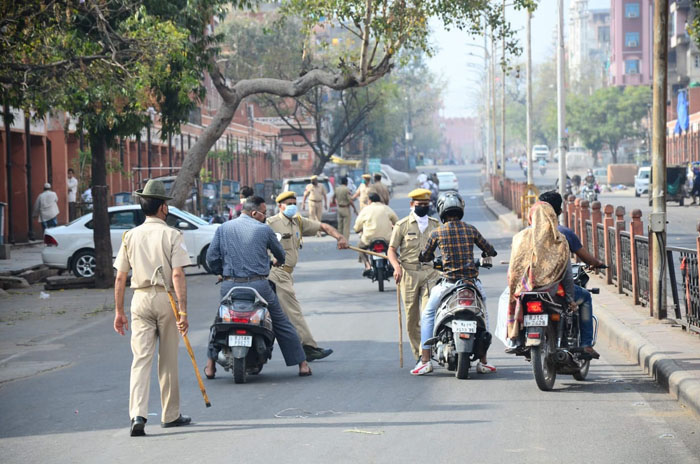 Despite the lockdown, people are venturing out of their homes. Policemen stopped vehicles at checkpoints.

Jaipur: Two more people tested positive for Coronavirus in Jodhpur on Monday evening. With one new case coming to fore in Pali, the total number of people infected with Coronavirus has reached 32 in Rajasthan. Four Coronavirus patients are undergoing treatment at MDM Hospital in Jodhpur. Of the 1227 samples tested in the state so far, 32 tested positive, authorities said.

Rajasthan health minister Raghu Sharma told media persons that the situation is under control in Rajasthan after strict measures taken by the government.

“Chief minister Ashok Gehlot himself is monitoring the situation constantly. CM and health department officials are in touch with all district collectors and SPs through video conferencing and taking their real-time feedback. The department is prepared to deal with any type of situation,” said Sharma.

“A team of nine IAS officers along with ACS medical and health is keeping a tab on the situation. More than 1200 samples have been tested. Of them 32 were found positive. No deaths have been reported so far,” the minister added.

After chief minister Gehlot issued a warning against violation of the lockdown, the people remained indoors on Tuesday. Gehlot said that the government would be forced to impose a curfew if the people didn’t take the lockdown seriously. The government has banned movement of private vehicles also.