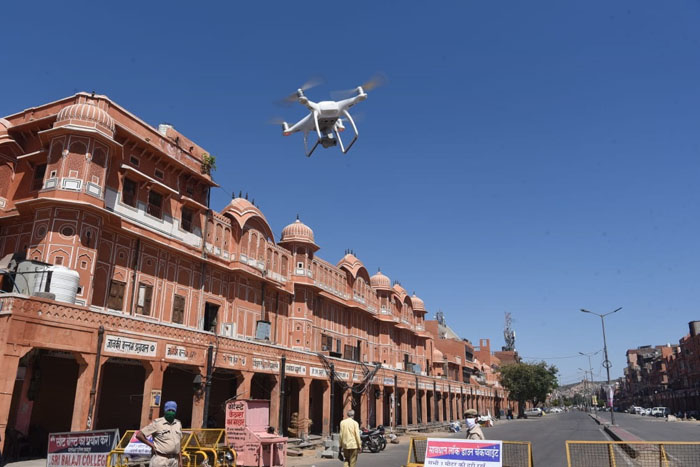 Police keeping a tab on lockdown violators with drones in the Walled City.

Jaipur: Coronavirus (COVID-19) continues to spread in Rajasthan. While 21 new cases were reported by Saturday afternoon, one woman who was undergoing treatment after testing positive for the virus died in Bikaner. Of those who tested positive in the state on Saturday, 10 are members of Tablighi Jamaat. The total number of COVID-19 positive patients have crossed 200. Jaipur is ahead of other districts with 55 cases so far. The virus has spread to 18 districts with Banswara reporting its first case on Saturday.

The woman who died in Bikaner had been admitted to PBM Hospital in Bikaner for the past four days.

The police have cracking down on violators of Coronavirus prevention guidelines and lockdown. In Sikar’s Neem Ka Thana area, a Mawlawi was arrested for asking people to join prayers in the mosque. He is a resident of Jharkhand.

On Friday, a man had been arrested in Galta Gate area of Jaipur for sharing a video in a Whatsapp group. In the video, he was asking people to attack medical teams.

Bhilwara has been turned into a fortress as the administration has clamped ‘maha-curfew’ here on Friday. Over 3000 jawans of police, RAC, home guards and SDRF have been deployed in the town to ensure that no one ventures out of their homes.

A video showing a tantric with a huge crowd of villagers – supposedly in Ramanagar area of Bundi – also went viral on social media on Saturday. The police have launched an investigation into the authenticity of the video.