Rahul Gandhi will arrive at Jaipur airport after 12:00 pm. From the airport, Congress president will start his road show in a specially designed open bus and address the public at several places including Tonk Road. 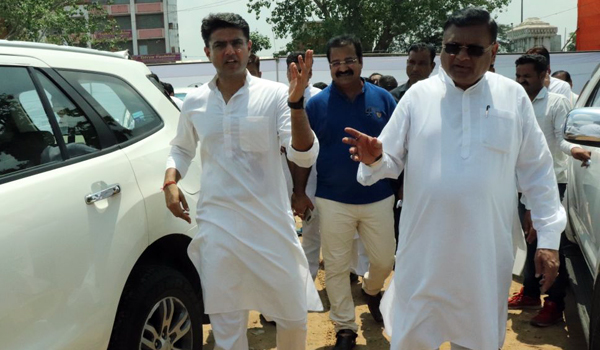 Jaipur: Congress President, Rahul Gandhi, will take out a 12- km roadshow in Jaipur on Saturday. The route has been decided with the approval from police and special protection group (SPG). After a 3-hour long roadshow, Gandhi will address a gathering of people at Jaipur’s Ramlila Maidan.

Rahul Gandhi will arrive at Jaipur airport around 1.30 pm. From the airport, Congress president will start his roadshow in a specially designed open bus and address the public at several places including Tonk Road. The procession will reach Ramlila Maidan. He will be welcomed at 14 different places in the city by his party workers.

The roadshow will start from Jawahar Circle and pass through JLN Road, Tonk Road, Gopalpura Bridge, Laxmi Mandir, Gandhi Nagar, Rambagh Circle, Narayan Singh Circle, Trimurti Circle and Ramniwas Bagh of the city and will finally arrive at Ramlila Maidan, where he will address a huge gathering of people.

However, his visit to the Govind Dev Ji and other temples has not been confirmed.

This road show will be the first public interaction of Rahul Gandhi with party workers in Jaipur after he became Congress national president, said Sachin Pilot, state party chief.

Each block president has been given the responsibility of bringing two thousand workers, whereas 300 delegates from every district will be present at Ramlila Maidan. The passes have been issued by the party for the delegates. Only the persons with the passes will be allowed to enter Ramlila Ground.

The police have made elaborate security arrangements for the event. The intelligence agencies have also been put on high alert.