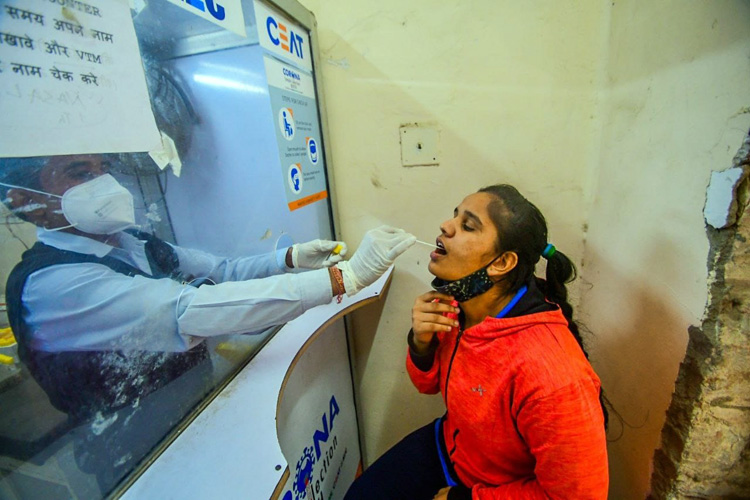 A woman being tested for Covid-19 at SMS Hospital. File Photo

Jaipur: Days before the massive rally being organized by the Congress in Jaipur, the party’s ex-minister Brij Kishore Sharma has tested positive for Covid-19. The Congress is planning a massive rally in Jaipur. His report came out positive on Friday, scaring the Congress workers and leaders who came in contact with Sharma in the past few days. Sharma had been meeting people for the preparation of the rally to be organized on December 12. Sonia Gandhi and Rahul Gandhi are expected to attend the rally.

Sharma was in the meeting that took place at the Congress headquarters on November 30. He was not wearing a mask properly. He mingled with ministers and MLAs, shaking hands and exchanging pleasantries.

It has become a great cause of concern for senior leaders as Rajasthan Chief Minister Ashok Gehlot, state in-charge Ajay Maken and state president Govind Singh Dotasara and more than 10 ministers of the government were present in the meeting convened at the state Congress headquarters to discuss the preparations for the rally.

The BJP is also organizing programs on December 5 to welcome union home minister Amit Shah. Over 40,000 BJP workers would welcome Shah on the route leading to the BJP headquarters from the airport.

With some people including children testing positive after their arrival from South Africa, there are already concerns regarding the new variant of the virus. These roadshows and rallies are being organized at a time when the next few days are crucial to prevent the spread of the virus.