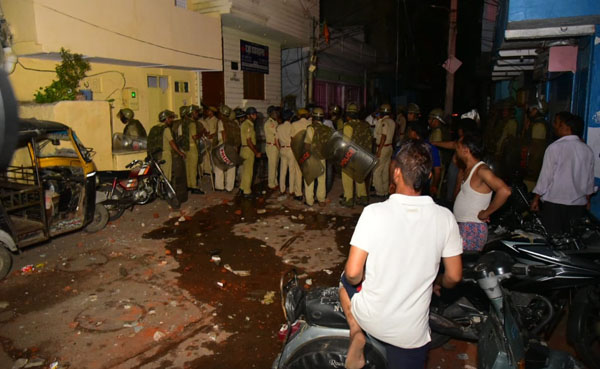 Jaipur: Heavy police force has been deployed in Moti Dungari Road following clashes between two groups of people late on Sunday. The tension flared up after two men entered an argument over bike parking in Lodhon Ki Gali. Two groups of people started hurling stones on each-other. At least three people were injured in the clashes. Elaborate security arrangements were put in place in the area as the city was celebrating Ganesh Chaturthi on Monday. The situation is under control, police officials said.

According to senior police officers, a youth from another neighbourhood parked his bike in Lodhon Ki Gali. It led to a confrontation. A huge crowd of people gathered there and it soon turned into a law and order situation. A team from Lalkothi police station was rushed to the spot, but the situation got out of control when the people started hurling stones.

“Jawans of QRT, ERT and RAC have been deployed in the area to keep an eye on the law and order situation. We are trying to identify those involved in stone pelting,” said a police officer.

At least five cases of similar clashes have been reported in communally sensitive areas of the city including Subhash Chowk, Eidgah, Gangapole and Kalyan Ji Ka Rasta over the past 20 days. The police had to suspect mobile internet services in some of these cases to prevent of rumours.