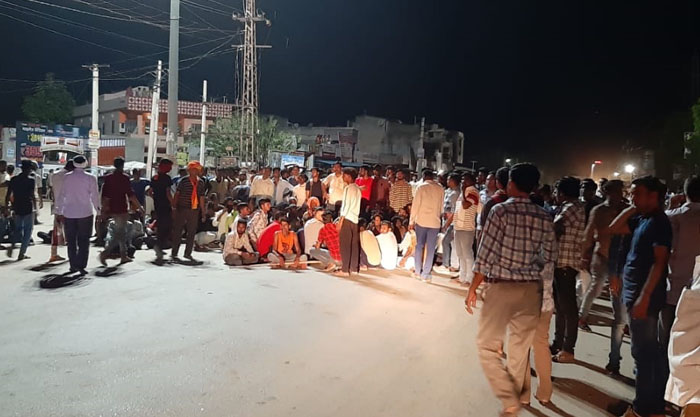 Jaipur: The district administration imposed curfew in Malpura town of Tonk district and suspended mobile internet services following communal tension. The tension broke out between the people of two communities after a scuffle during dussehra procession on Tuesday. The member of a community pelted stones on the procession. Some right-wing organizations refused to burn the effigies of rawana demanding action. The rawan dahan ceremony took place around 4.15 am on Monday after a sit-in by the people from another community throughout the night.

Heavy police force was deployed in communality sensitive Malpura town after the scuffle between the people from two communities on Tuesday. The people were taking out Dussehra procession when the tension escalated.

Some right-wing organization supporters staged a sit-in outside the Malpura police station. The local MLA was also among the protestors. They refused to burn the effigy of rawana. Senior police officers including Tonk SP, police IG and SP reached the spot to placate the agitators.

The administration then performed the dussehra rituals at 4.15 am to defuse the tension.

“Curfew has been imposed in the town and we are keeping a watch on the law and order situation. The situation is under control for now. The internet services have also been suspended to prevent spread of rumours till further notice,” said a senior administration officer.