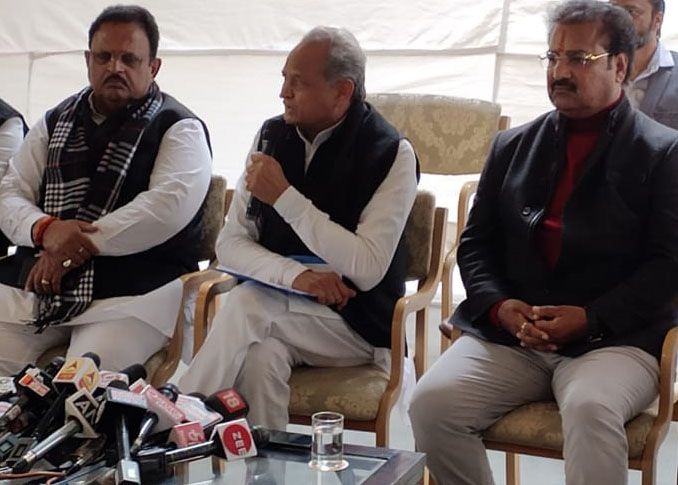 Rajasthan CM addressing a press conference to discuss preparations for the Peace March.

Jaipur: Rajasthan chief minister Ashok Gehlot will take out a Peace March from Albert Hall to Gandhi Circle from 11 pm on Sunday. Gehlot will appeal for peace and harmony in the wake of the violence and nationwide protests over the Citizenship Amendment Bill (CAB).

The Jaipur traffic police has put restrictions on the traffic movement in the area. Gehlot himself reached Gandhi Circle on Saturday and took stock of the preparations. Gehlot was accompanied by cabinet ministers including Raghu Sharma, Mahesh Joshi and Pratap Singh Khachariawas.

Gehlot will also walk for nearly 2.5 km. He said that no sloganeering and flag bearing will be allowed during the march. Gehlot appealed all the political parties to participate in the march and make an appeal to the people to maintain peace and harmony.

In a press conference at his residence on Saturday, Gehlot said that the BJP leaders were issuing irresponsible statements instead of trying to restore peace.

“It is very unfortunate that some people are indulging in violence. There are reports of 11 people being killed in Uttar Pradesh during protests. I appeal that people should maintain peace. Everybody has got a right to protest peacefully in democracy, but there is no place for violence,” said Gehlot.

He said that the people were kept in the dark about the bill which has led to rumours and violence.

“Those in power should have exercised caution and tried to understand the public sentiments, but they completely failed to do so resulting in the confusions and deteriorating law and order situation,” Gehlot added.