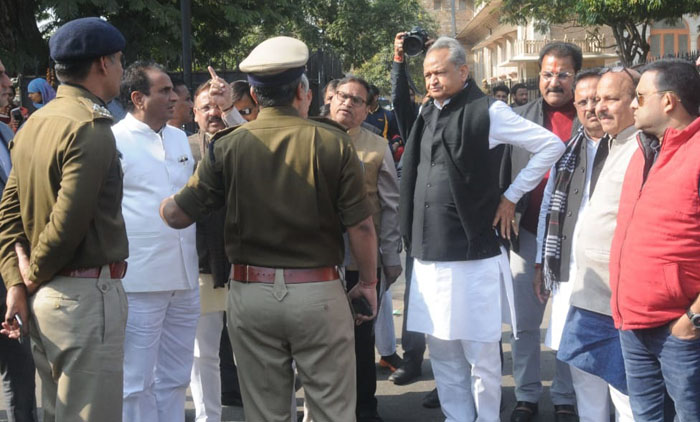 Protests and peach march announced in Jaipur on Sunday. Normal life to be affected.

Jaipur: For the first since Jaipur Metro was introduced in the city, the train will not be operational for security reasons on Sunday in the wake of protests and marches announced by various organisations over the Citizenship Amendment Act. Chief minister Ashok Gehlot will also take out a peace march. The traffic police have announced diversions and traffic restrictions in the city.

According to preliminary reports, Jaipur Metro train will not be operational from 8 am to 2 pm on Sunday. Similarly, the Jaipur police commissionerate has written to the divisional commissioner for the permission to shut down mobile internet services to prevent spread of rumours on social media.

The police has requested that the internet services should be banned from 6 am to 8 pm on Sunday.

“In the wake of the protests announced by the Muslim community and the peach march being organized by the government, the internet services shouldn’t be operational,” the letter reads.

There were reports that the liquor shops were also remain closed in communally sensitive areas, particularly in the Walled City.

Rajasthan chief minister Ashok Gehlot will take out a Peace March from Albert Hall to Gandhi Circle from 11 pm on Sunday. Gehlot will appeal for peace and harmony in the wake of the violence and nationwide protests over the Citizenship Amendment Bill (CAB).

In a press conference at his residence on Saturday, Gehlot said that the BJP leaders were issuing irresponsible statements instead of trying to restore peace.