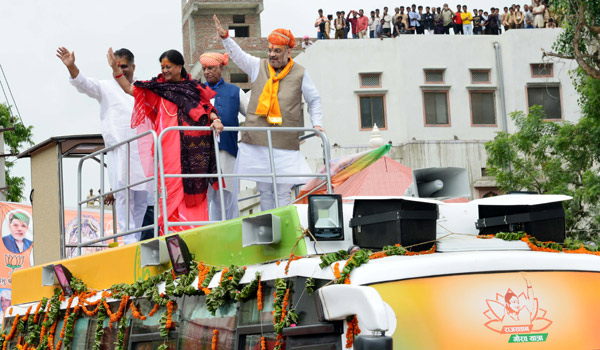 Jaipur: Chief Minister Vasundhara Raje reached AIIMS (All India Institute of Medical Sciences) in Delhi on Thursday to visit former Prime Minister Atal Bihari Vajpayee as he has been on life support for the last two days and his condition remains critical as per a news bulletin released by AIIMS.

CM Raje postponed Rajasthan Gaurav Yatra scheduled to start in Sawai Madhopur on Thursday. The new date of the second phase of the Yatra is yet to be decided. BJP state chief Madan Lal Saini announced that the tour has been postponed.

The first phase of the Rajasthan Gaurav Yatra was recently completed in Udaipur division. It started from Charbhujanath Temple in Rajsamand district on August 4. The tour was flagged off by BJP national president Amit Shah. The tour was supposed to conclude in Ajmer on September 30. The Yatra is now interrupted due to Atal Bihar Vajpayee’s critical condition.

Subscribe to WhatsApp updates for Jaipur News Click on the following link(s) to find the latest & related stories on: Rajasthan Gaurav Yatra
RELATED

Rajasthan Gaurav Yatra to begin in Kota division from tomorrow