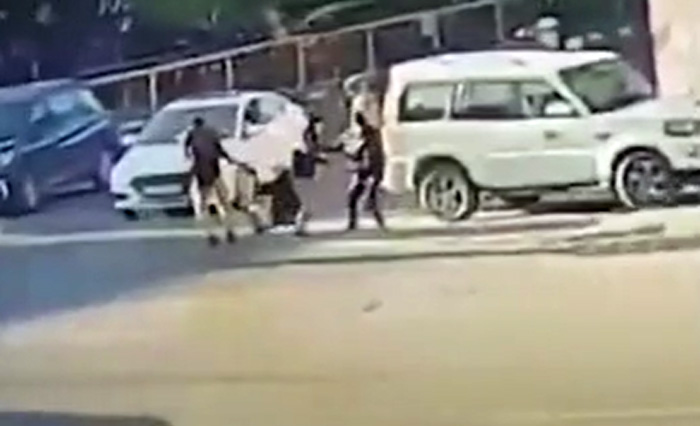 Murder in police custody caught on camera in Jodhpur.

Jaipur: Five days after a criminal, identified as Suresh Singh, was shot dead while he was being transported to a court in police custody in Jodhpur, the CCTV footage of the incident has surfaced. The footages show how the criminals opened fire at the prisoner who was shot dead at one of the busiest intersections of the city in broad daylight. Suresh Singh had sustained at least five bullet injuries. The shooters had escaped from the spot.

The footages show the shooter firing on the back of the prisoner from a close range without any fear of the accompanying policemen. The shooter fired again while running. The bullet hit the door of a shop. One of the policemen tried to chase the shooter, but he escaped.

The incident took place at Bhati crossroads on December 18. The police have arrested history-sheeter Jabbar Singh Rajput of Manihari village of Pali a day after the shooting on the basis of suspicion.

It has come up during preliminary investigation that history-sheeter Jabbar Singh’s sons Praveen Singh and Bharat Singh hired a shooter to avenge the attack on their father. According to the police, the shooter’s target was Suresh Singh as well as Kalu Puri. But Kalu narrowly escaped. Police are searching for Jabbar Singh’s two sons.