CBI recovers 7 claws of tigers and leopards from Jaipur; 3 arrested

he accused have been booked under various laws related to the Wildlife Protection Act and possession of illegal wildlife material. 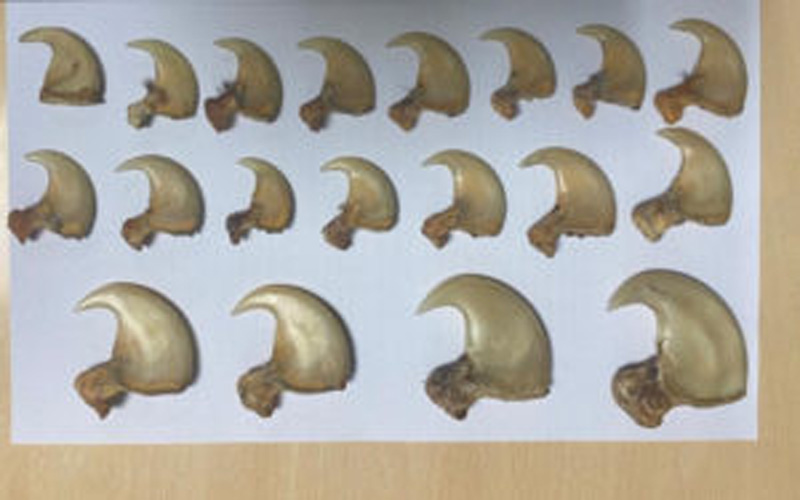 Tiger and leopard claws that were recovered by CBI

Jaipur: The central bureau of investigation (CBI) recovered seven claws of tigers and leopards from Jaipur and arrested two city residents. It was an inter-state action in which 19 claws were recovered from Delhi also. One man was arrested from the national capital, a CBI spokesperson said.

The accused have been booked under various laws related to the Wildlife Protection Act and possession of illegal wildlife material. The CBI cracked down on the interstate gang and didn’t rule out the possibility of an involvement of a network of wildlife offenders.

Those arrested were identified as Pinter Patel, Paramjeet Singh and Ashok Parekh. Patel and Parekh were arrested from Jaipur, while Singh was nabbed from Delhi.

An FIR has been registered against three named accused and unknown others. It was alleged that a network of inter-state gangs was involved in the illegal trafficking of wildlife material. CBI in association with the official of the Wildlife Crime Control Bureau conducted searches in Delhi and recovered 19 claws of leopard or tiger from the accused men.

Further searches were conducted at certain places in Jaipur which resulted in the recovery of seven individual claws of tigers and leopards.

The arrested accused were produced before the Competent Court at Delhi and remanded to police custody. The CBI will interrogate the three accused men to identify other members of their network.