Cars falls into gorge in Nahargarh; narrow escape for 5 passengers 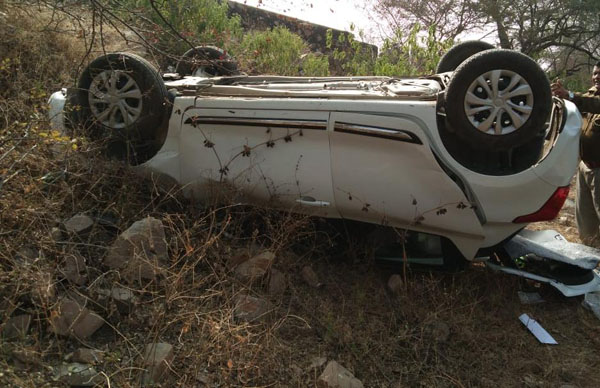 Jaipur: Five members of a family had a narrow escape after the car they were travelling in lost control and skidded off the road on Nahargarh hills on Tuesday. The car got stuck in bushes and the airbags got deployed. The passengers including two children got away with minor injuries. This is the second incident of a car skidding off the road leading to Nahargarh fort within a week.

According to eye-witnesses, the incident took place around 11 pm on Tuesday. There were five people in the car. They were visiting Nahargarh Fort.

“The car skidded off and got stuck in bushes nearly 50 feet below. The airbags also deployed so no one was hurt seriously. The family members got out of the car and shouted for help,” said an eyewitness. The car is said to be registered to one Vijay Singh.

After the passers-by informed the police control room, police teams from Bharmapuri and accident police stations rushed to the spot. The car was pulled up with the help of crane.

A similar mishap was reported on December 3.