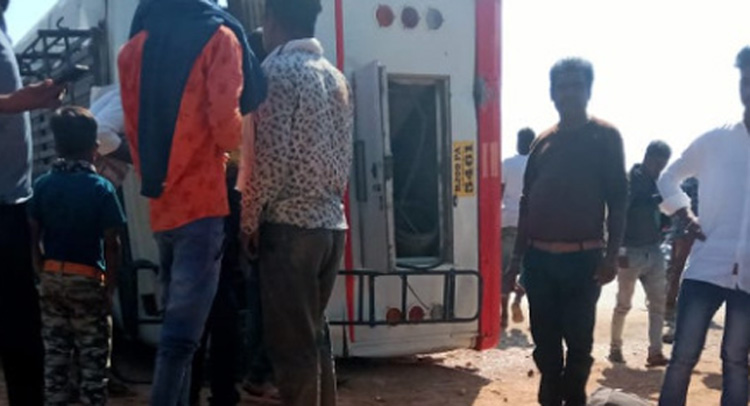 Jaipur: Three people including two women were killed, while 20 others were injured – some of them critically – after a Lok Parivahan Sewa bus collided with a truck in Chittorgarh district on Friday. The bus which was on its way to Bhilwara from Udaipur overturned after the collision. It was carrying 55 passengers. The injured were admitted to a nearby hospital for treatment.

The mishap occurred near Rithaila junction in Sadar police station area of Chittorgarh on Jaipur-Ahmedabad national highway. According to preliminary reports, the truck lost balance and collided head-on with the bus approaching from the opposite direction. The collision was so intense that the bus skidded and overturned nearly 50 feet away from the accident spot.

Many passengers got stuck in the bus and started crying for help. The passers-by and local residents rushed to their rescue. They helped many passengers get out of the bus. According to reports, three bus passengers died on the spot. Of the 20 passengers who were injured, two were in critical condition. They were referred to SMS Hospital in Jaipur for treatment.

The police have seized the truck and an FIR for rash negligent driving has been registered against the truck driver. A search has been launched for him.